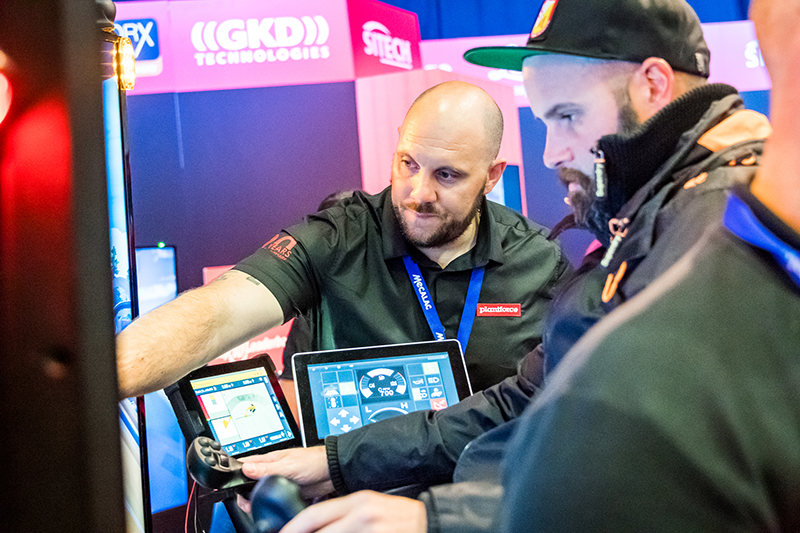 Immersive training technology is seeing rapid growth within the construction sector. Advanced simulator development for construction site machinery is being implemented by many leading construction businesses, who are using leading-edge technology simulation-based operator training, as a versatile and effective tool to train operators in a safe environment.

Tenstar Simulation, headquartered in Sweden, is a leader in its field of delivering simulation-based education tools for the construction industry.

Simon Hogg represents Tenstar in the UK, as the UK’s area sales manager. Hogg worked closely with Nick Ground, founder and chief executive of GKD Technologies, to interface the 2RCi rated capacity indicator within the Tenstar Simulators. The simulators made their debut at the Plantworx Construction Machinery Exhibition in Peterborough, held in June of this year, as part of the Simulation Zone, which was delivered by, Plantforce Rentals.

Hogg explained how the collaboration with GKD began, “My background is within construction and I have worked extensively with GPS suppliers. I have also worked on the rail side quite comprehensively and in the UK market safety sells – it’s as simple as that – and we are seeing a significant increase where these safety systems are becoming mandatory.”

Hogg continued, “I approached Nick and discussions took place around RCI (Rated Capacity Indicator) systems on rail machines and how, if fitted with systems like the GKD 3RCi+, it would represent a true reflection of what an RRV (Road Rail Vehicle) operator would be expected to use on the railways. The UK is seen as a global leader in safety and training within the rail sector, particularly in RCI systems and using simulators to train operators would be the next logical step.”

“Nick and I visited a number of rail events and we discussed how we could integrate the GKD RCI system for height and slew on simulators in the first instance, and how simple it would be, and the project quickly emerged. Added Hogg.

“During Bauma Munich I introduced Nick to Freddy Lund, the owner of Tenstar, and Nick did a good job of explaining safety cells in the UK market, both in rail and construction and how there would be joint success by collaborating.

Hogg spoke about the Simulation Zone at Plantworx and GKD, he said, “There were a lot more rail visitors at Plantworx because of the new Railworx element – which for us meant we were able to sit with very senior National Rail executives, their training teams and plant managers in a simulator seat and have them operate a GKD system.

The feedback we received was very positive as they now see how this should be part of their training mandate – and within an hour’s meeting this was the real switch on for them.”

Hogg explained, “To my knowledge, this is the first time a simulation company has interfaced with a safety system like this (GKD Technologies). We made a conscious decision from the beginning to keep it simple – first show this interface in a civils environment, as we don’t currently simulate in the rail environment, and to show simply height and slew restriction.

This has allowed us to demonstrate ‘proof of concept’ which is going back to discussions we were having with rail management teams – if you can see it working on a tracked excavator in a civils environment – and if you think about HS2 – where 70% of the project is carried out by civils until the ballast goes down – then it becomes a rail project – we have proved that this concept works. Now that this principle is proven, with the 2RCi for height & slew, the development will continue to represent load, and then also an RCI working on a rail machine (RRV) using the GKD 3RCi+ system.”

Alastair Brown, director GKD Technologies represented GKD in the Simulation Zone at Plantworx, he said, “From a GKD perspective you saw the height and slew application as if it was on a real excavator including, when it was operating in conjunction with other technology, for example, the Trimble and Leica 3D control systems.”

“The best thing about the interaction with the 2RCi – it was exactly what it would be like to use in real site conditions on an excavator and the users could see how easy it was to set up the limits for slew, height– it really showed the systems to their full capabilities. Visitors could see immediately the benefits the system can bring to their operation.” Explained Brown.

Brown reported that he received plenty of good feedback. He said, “Quite a number of visitors having been on one of the simulators and trying the GKD system were keen to know more and went over to the GKD stand on the Showground, where ordinarily, they might not have done.”

Hogg echoed Brown’s comments he said, “There were many good meetings at the Show with training organisations, civils operators and construction companies. The next step is that there are some genuine opportunities for training companies to have some real value-added benefit to what they are offering their clients – where they can not only offer basic training – but also offer training on various applications, including GKD. This would provide these companies with the upper hand in terms of training – by offering added-value.

The requirement for training and system familiarisation for operators is even greater, particularly in the civils sector, where there is a chronic shortage of trained and skilled operators. It’s reaching a critical point, particularly with the onset of huge infrastructure projects, including HS2 – simulation training can offer a cost-effective and safe solution to operator training.”