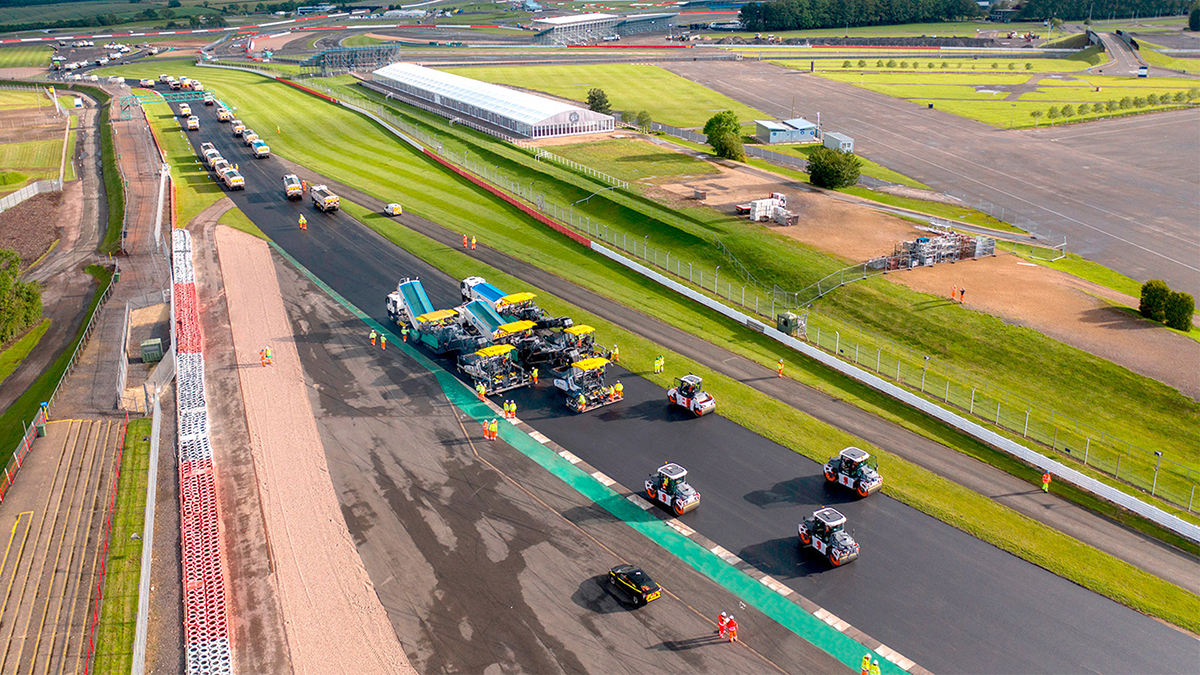 Machines and systems from Wirtgen, Vögele, Hamm and plants from Benninghoven resurface the Silverstone Circuit

The Silverstone Circuit in England is one of the world’s legendary motor racing venues. In collaboration with circuit design specialists from the engineering consultants Studio Dromo, lead contractor Tarmac wins the race to reprofile and resurface the legendary motor racing circuit in time for the British Grand Prix – with Wirtgen Group machines, plants and systems.

The unusual aspect of the resurfacing project: The operator of the Silverstone Circuit took advantage of the project not only to mill off and renew the asphalt package, but also to reprofile the track. In a 3D digital terrain model, the engineers identified uneven sections and sections prone to aquaplaning. The planners optimised the design of the racetrack with these data and, thanks to 3D GPS-guided digital control systems, ensured pinpoint precision as Wirtgen milling machines removed the existing pavement and Vögele pavers and Hamm rollers repaved the track with a special asphalt mix from two Benninghoven mixing plants.

Eradication of bumps, prevention of aquaplaning and changes to the camber in corners – these were the most important reasons for reprofiling the Silverstone racing circuit. This is why the resurfacing project began with the generation of a 3D terrain model by the Italian circuit design specialists from Studio Dromo and the British lead contractor, Tarmac. This enabled the experts to identify and optimise weak points.

Following acceptance by the operator of the circuit, several total stations transmitted the milling parameters directly to the Wirtgen milling machines in digital form. The advantage of this is that it saves time, assures utmost precision and guarantees highest quality milling results. Because, tolerances in the region of only a few millimetres are decisive, especially in the construction of racing circuits. To ensure that these requirements are met, Wirtgen cold milling machines rely on an intelligent assistance system: LEVEL PRO ACTIVE.

The levelling system with innovative control panels allows intuitive adjustments. It is fully integrated in the machine control system and, as essential machine functions are directly interlinked, provides a high level of automation.

In combination with the 3D Kit, LEVEL PRO ACTIVE also offers a simple and field-tested interface that is compatible with 3D systems from many well-known manufacturers. This was also the case in Silverstone: Milling parameters from the 3D terrain model were received by onboard laser sensors and autonomously processed by the Wirtgen cold milling machines. ‘With a permissible deviation of ±2 mm over a distance of 13 m, it was clear that we would have to use the latest cutting-edge technologies to deliver the excellent results the client expected’, said Tim Smith, Regional Technical Manager at Tarmac.

During the development of the latest generation of large milling machines, Wirtgen naturally also thought of the operators. For instance, setting up the machines for 3D operations is now very easy. The engineers substantially simplified the mounts for the sensor systems on the weather canopy of the machines. This new system made it much easier for the operators of the two Wirtgen W 210 Fi large milling machines used on the project to do a good job. Although the average milling depth for the whole circuit was 7 cm, it actually varied considerably at almost every point of the racetrack. When the milling was completed, it had taken the highly experienced Tarmac team only four days to remove 87,000 m² of asphalt from the racing circuit.

The production of the asphalt mix required for the resurfacing project at Silverstone was almost a science in its own right. For example, Tarmac first removed a major proportion of the fines present in the crushed stone by washing. The cleaned stone was then used for the fresh mix produced by two Benninghoven asphalt mixing plants at Tarmac’s Elstow and Harper Lane sites. Despite complex formulations with special bitumen and high-tech aggregates, the plants were able to fulfil the stringently controlled Formula 1 quality standards. The result is a highly durable asphalt surface designed to sustainably resist the extreme lateral loads of hard braking and fast cornering manoeuvres. At the same time, it considerably reduces the risk of new bumps appearing on certain sections of the circuit. The on-site logistics were just as challenging as the asphalt production. The challenge here was to transport 360 tons of asphalt an hour to the circuit.

The task of paving the new asphalt layers was assigned to teams of Vögele machines. Each of the three SUPER 1800-3i pavers worked in unison with its own MT 3000-2i Offset PowerFeeder. Here, the mobile feeders played a decisive role in assuring the required paving performance and quality by eliminating the need for transferring material to the pavers from trucks. While the mobile feeder operators concentrated on transporting the material and liaison with the truck drivers, the paver operators were able to focus exclusively on the actual paving process.

A further contribution to paving quality was made by the deployment of the pavers in echelon formation. The two SUPER 1800 3i pavers on the left and right lanes progressed in a slightly staggered formation behind the paver on the centre lane. The three pavers worked ‘hot-to-hot’ during the paving process to create a continuous, seamless surface across the entire width of the track. Extreme importance was also attached to the excellence of the asphalt surface in other respects. For instance, Tarmac constantly checked and documented whether the paving was carried out within the correct temperature limits. To enable this, all three pavers were equipped with RoadScan, Vögele’s non-contacting temperature-measurement system.

The Hamm heavyweights utilise onboard intelligence during compaction

The technologies from Hamm played a particularly important role in the final compaction of the 3 cm binder course and the 4 cm surface layer. Thanks to WITOS HCQ, the HD+ and DV+ series tandem rollers were able to deliver intelligent compaction. ‘HCQ’ – ‘Hamm Compaction Quality’ – is an intelligent compaction system combining several products for the measurement, monitoring, documentation and control of compaction processes. The system monitors compaction progress in real-time and displays it on a screen in the operator’s cabin of the roller.

WITOS HCQ thus increases the efficiency of the compaction process and makes an active contribution to the achievement of flawless surface quality. Proof of this can of course also be provided in cases like the challenging resurfacing project at the Silverstone Circuit: Tarmac achieved full compliance with the stipulated asphalt surface grip characteristic (roughness) of 0.28, calculated on the basis of the International Roughness Index (IRI).

The Formula 1 circuit resurfacing project was enormously challenging, even for an experienced contractor like Tarmac. ‘We planned the project down to even the smallest details. We held detailed discussions with our colleagues from the Wirtgen Group in the UK to ensure that everything would fit seamlessly into our scheme when we got the milling machines, mixing plants, pavers and rollers onto the site’, said Matt Fields, CI Manager at Tarmac. ‘We too left nothing to chance at Silverstone, and prepared ourselves for our mission like a racing team – including our own crew of service technicians to prevent unforeseen pit stops – and it all worked out exactly as planned’, added Richard Allsopp, Operations Director at the Wirtgen Group subsidiary in Great Britain.

The resurfacing work at Silverstone was completed in time for the scheduled Formula 1 racing weekend. As the action over the weekend showed, the organisers and the FIA officials were not the only ones satisfied with the result: Lewis Hamilton set a new lap record in qualifying, and Max Verstappen set another in the race.