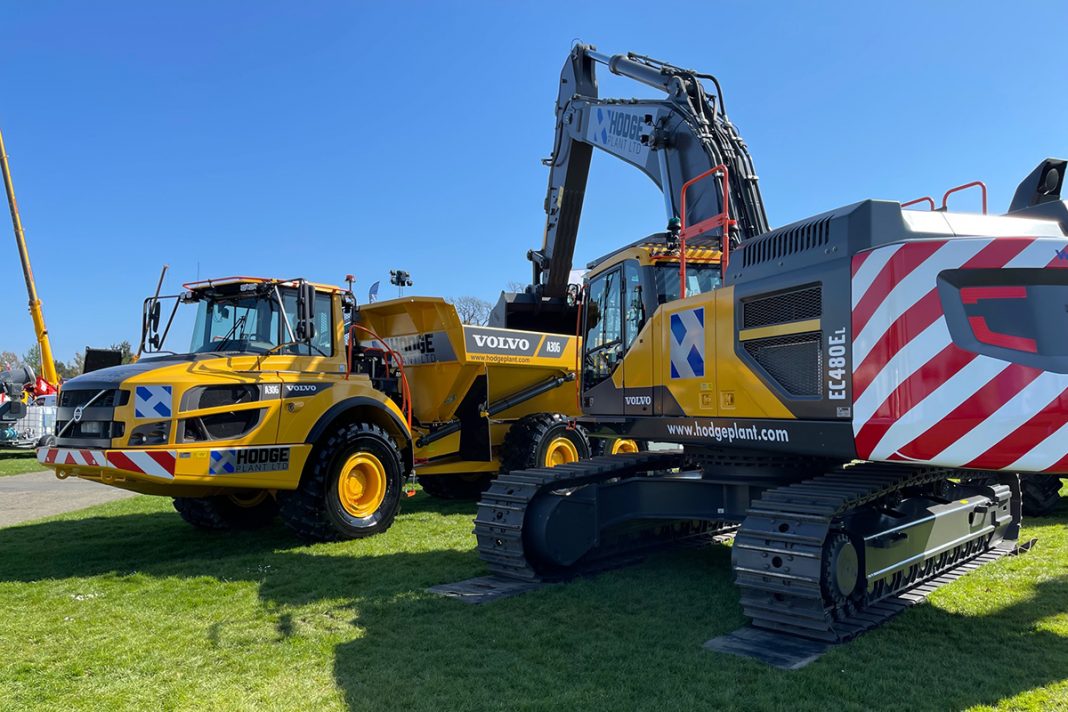 ScotPlant 2022 solidified the exhibition’s status as the leading event in the Scottish construction equipment industry calendar as huge crowds took full advantage of the first opportunity since the pandemic to see such a wide range of machines from the world’s leading manufacturers in one place.

Around 200 exhibitors and thousands of visitors enjoyed two days of warm sunshine at the magnificent Royal Highland Centre near Edinburgh, as an array of incredible machines were showcased by major brands and their local dealers including Bobcat, CASE, Doosan, Hitachi, Hyundai, JCB, Kobelco, Komatsu, Kubota, Liebherr, McCloskey, Merlo, Powerscreen, Rokbak, SANY, Takeuchi, Terex, Thwaites, and many, many more.

As ever, the event hosted a number of high-profile machine launches and exhibition debuts.

Liebherr’s award-winning TA230 articulated dump truck was shown at a UK exhibition for the first time, while SANY unveiled two brand new excavators in the form of the 40-tonne SY390 and 7.5-tonne SY75.

Mark Proudfoot, director of Molson Scotland, described being back at ScotPlant as ‘amazing’. The firm was showcasing products from across its portfolio including Kobelco, Thwaites, Sennebogen and Terex Finlay.

“It’s been so long and the energy going around the place is phenomenal,” he explained. “I think this shows the industry is really buoyant and it gives everyone the chance to interact, mingle, find out what’s going on – the good things and the bad things. Fuel is on everyone’s agenda at the moment so that’s one of the topics we’re talking about.

“Feedback from customers has been great. There’s been a couple of cuddles, handshakes, and it’s good to get past Covid.”

SANY enjoyed a fabulous ScotPlant debut, having snapped up one of the biggest plots at the event. Scottish sales manager Brian McGrane highlighted the importance of ScotPlant to the Scottish plant industry, saying, “It’s fantastic to be back at exhibitions again, seeing customers. A lot of them we’ve not seen for a long time because of Covid and it’s been really good to be back out and mixing in amongst them.

“Our 50-tonne SY500 has gathered the most attention as it’s such a big machine, but to be honest we’ve tried to bring the full range to the show as we’ve got such a big stand. Everybody’s been really impressed by what we’ve got on show.”

Takeuchi used ScotPlant to showcase a whole host of the manufacturer’s latest machines, with a particular focus on the new 3-Series. The TB370 – which marked Takeuchi’s return to the seven-tonne excavator market –generated huge interest across the two days.

Takeuchi UK marketing manager Holly Cooke described being back in front of customers in an exhibition setting as ‘amazing’. “It’s really important (to have events like ScotPlant),” she explained. “This is a really face-to-face industry; people need to physically come and touch, feel and sit in these big pieces of equipment. There’s only so much you can see from a brochure or website. People want to get in front of it and talk to you.

“The figures for Takeuchi in Scotland have just grown and grown. This is one of our major shows. We love coming up here.”

Shane Paver, sales director – north at Access Platform Sales, revealed the business concluded orders worth almost £1 million over the weekend. This includes deals with both new and existing customers.

“I’ve basically sold everything off my stand apart from one machine,” he said. “The main sales have been LGMG and Hinowa platforms. ScotPlant’s always been a good show for me – not to the volume of this one – so I’m really pleased with that.

“We do a lot of exhibitions… but with ScotPlant you get to see a lot more people than what you would normally by driving around. It seems that people still have quite a bit of money to spend.”

James Ross, commercial director of attachment specialist Miller, revealed the exhibition has provided a real morale boost for the business. “It’s fantastic,” he said. “For the whole Miller team, re-engaging with customers face-to-face. You can see from the people already here there’s a massive buzz.

“In the first two hours, we’ve already had some great enquiries. We’re touching base with a lot of people we haven’t seen in a long time, and this is a good chance to re-connect with a lot of the projects happening in Scotland.”

Scot JCB raised money for breast cancer at ScotPlant 2022 after teaming up with Tom Grant Plant to support Breast Cancer Now. Tom’s brand new pink JCB 245XR was a major attraction all weekend, with the stunning machine displaying a large QR code and URL link to a donation page.

Social media sensation Amy Underwood, aka The Digger Girl, was also in town. She got the chance to meet some of her mammoth 211,000 online following during her first visit to ScotPlant. The 27-year-old shot to online stardom after she began using TikTok and Instagram to document her role as a plant and HGV operator at her father’s firm, John Underwood Plant Hire Contractor.

“I only started social media in November 2019, so (with the pandemic) I’ve not really been able to speak to people (who watch my content) – it’s all been on social media,” Amy said. “So, to come to ScotPlant and have people coming up to speak to me is really nice; it’s my first one and I’m really enjoying it.”

Speaking ahead of ScotPlant 2022, trade body the Scottish Plant Owners Association (SPOA) revealed that the conversations that would take place at the show would be a ‘barometer’ for the industry and the challenges ahead.

Gary Moug, editor of Project Plant magazine, which is published by ScotPlant organisers Peebles Media Group, said, “It’s been an absolutely incredible couple of days. The weather was fantastic and exhibitors and visitors were just blown away by the calibre of machines on show.

“After all the constraints of the past two years, you could see how much it meant to everyone to be able to engage face-to-face once more and network and do business in a more traditional fashion. The atmosphere all weekend was terrific and the feedback – both in-person and via social media – has been wholly positive. ScotPlant just keeps getting bigger and bigger. Roll on 2024!”