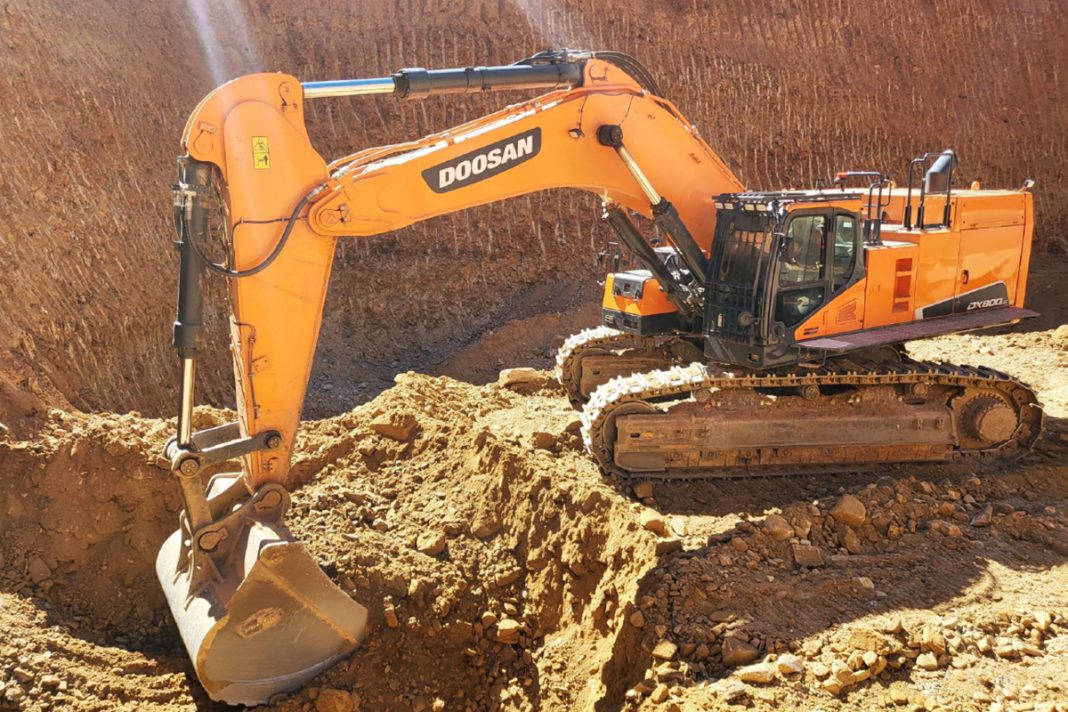 The new DX1000LC-7 has been supplied by INTRAC Group, the Doosan Authorised Dealer for the Baltic countries of Estonia, Latvia and Lithuania.

The new excavator has joined the existing Doosan DX800LC-7 80 tonne and DX490LC-7 50 tonne models already working at KKT’s oil shale mine at North Kiviõli in Estonia, where the company also operates a number of other brands of 80 tonne excavators.

The purchase decision to replace one of the existing 80 tonne machines with the new DX1000LC-7 was based on the successful performance of the DX800LC-7, with which KKT is burning 10 litres per hour less fuel than the competitive machines, for the same production output.

These savings really add up – after over 4000 operating hours, the DX800LC-7 had already saved the equivalent of 40,000 litres of fuel, a massive figure especially when the escalating price of fuel is considered.

The Promise of Even Greater Savings

The new DX1000LC-7 promises even more savings. Driven by the most powerful engine in the 100 tonne class, the DX1000LC-7 also has the highest hydraulic flow for this size of machine, providing best-in-class performance, with higher productivity, lower fuel consumption and smoother controls. Equipped with a 6.8 m3 bucket, the DX1000LC-7 is certain to offer even greater productivity.

The DX1000LC-7 excavator is powered by the new stage V version of the well-proven Perkins 2806J diesel engine, providing a high power output of 469 kW (629 HP), more than any other machine in this class.

The high output of the engine is combined with a Virtual Bleed Off (VBO) hydraulic system (D-ECOPOWER+), providing a best-in-class hydraulic flow of (3 x 523) – 1569 l/min and a high system pressure of 360 bar, together contributing to the best performance in the 100-tonne market.

The DX1000LC machine category has already proved popular around the world, with the largest volumes in South East Asia, China and Latin America. Doosan has delivered a total of 35 units so far and now builds both the 80 and 100 tonne models on the same production line.

The capacity has been increased to 10 units a month to meet demand for both machines. Based on feedback from customers, Doosan has forecast that the company will produce 50 to 60 100 tonne excavators in 2023 alone.

Estonia discovered more than 100 years ago that the stone at the North Kiviõli mine contained oil inside and from that time onwards started to extract it. The process to obtain the oil remains unchanged. First the stone is taken out, after around 8 m3 of overburden is removed, providing around 1 m3 of the precious oil shale. To remove the overburden, different techniques are used.

After removing the overburden, the extraction of the oil shale starts, again using different techniques. These include direct use of an excavator to load a truck or using a surface miner to extract the precious material, crush it and load it into a truck at the same time.

The transformation process to produce oil from the stone begins with the stone being crushed and then loaded into a reactor unit, where it is heated to between 400 to 800 oC depending on the size. As well as oil, phenol is also removed from the stone.

Overall, the process takes around two hours. Generally, a kg of stone can be 20 to 30% comprised of oil and the mine operator is moving around 10 million tonnes per year (combining the overburden and oil shale).

INTRAC is solely responsible for sales and servicing of the Doosan crawler, wheeled and mini/midi excavator, wheel loader, articulated dump truck and attachment ranges in Estonia, Latvia and Lithuania.

INTRAC’s sales and service centre for Latvia in Riga is acknowledged as one of the best in the Baltic region. The company also has impressive facilities at its branches in Vilnius and Tallinn, which are the focal points for the service INTRAC provides in Lithuania and Estonia, respectively.

In total, INTRAC has 13 outlets with workshops and 55 fully equipped service vans in the Baltic region. INTRAC customers benefit from superb on-site service networks, covering everything from emergency repairs to routine maintenance. The company’s factory-trained engineers have many years of hands-on experience of repairs and servicing of plant and machinery.