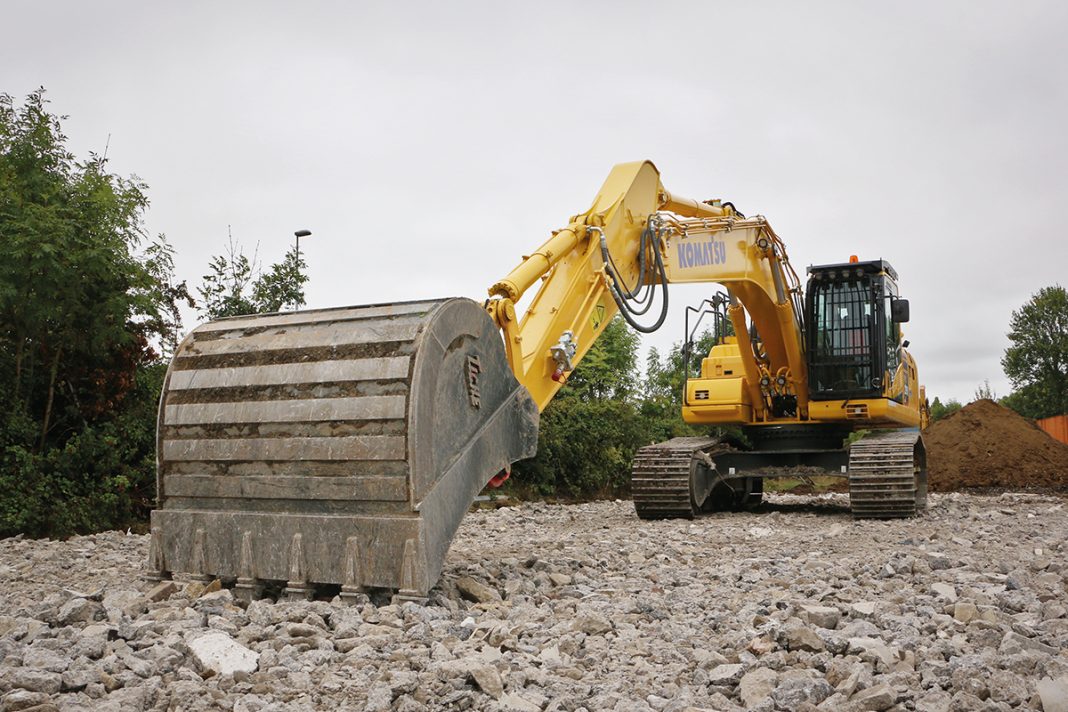 Taking on a variety of demolition and groundworks tasks day in and day out will test the toughness and reliability of a machine. After owning a Komatsu PC290 for five years without any problems, a Carlow contractor decided to invest in another. Dara Boyle travels to Tallaght, where the machine is tasked with tearing down a tobacco factory.

“If it’s not broke, don’t fix it.” These are the words of Shane O’Neill, operator with Smith Groundworks & Civil Engineering Ltd. Shane is talking about the company’s new Komatsu PC290LC-11, which had been delivered about two weeks before I went to see it on site.
This is the second of these 30-tonners that the Carlow outfit have bought, having picked up their first back in 2017.

The first machine proved to be well able to cope with the hardship of demolition work, so they decided to stick with the Japanese brand when the time came to invest in a new workhorse for heavy demolition tasks.

Smith Groundworks run a mixed fleet of excavators, but the new 290 brings the number of Komatsus they own to three, as there is also a PC130 on the fleet.

Tested in Tallaght
The machine was put straight to work on the site of the old Gallaher cigarette factory in Tallaght. A development of just over 500 apartments is due be built here in the coming years, but first, the sizeable factory buildings have to be torn down.

Smith are being kept busy on this job, which includes the demolition of the two buildings, followed by a reduced dig for the construction of a car park. At the time of my visit, the first of the buildings had been reduced to little more than a pile of broken concrete, which was being fed steadily into a crusher on site.

The PC290-11 had carried out a lot of the demolition work, fitted with a muncher. When I visited, I got to watch the excavator levelling crushed material and loading clay into a dumper using a Geith grading bucket.

Following this, the machine made its way to the crusher, where it cleared material from under the conveyor, this time with a Tighe digging bucket. The Komatsu was due to be teamed back up with the muncher the following week and put back to work chewing concrete on the remaining factory building.

Having put the digger through its paces for two weeks, I asked Shane for his verdict. “The Komatsu is a fine machine. It’s very stable, smooth and comfortable. It’s also very operator-friendly. I can’t complain about it – it’s an all-round nice machine”, he said.

The hefty 290 is particularly well suited to demolition, Shane explained. “The 290 is a very stable machine. When you have a three-tonne muncher on the machine at full reach, you need that stability. The 210 is not stable enough for work like grabbing concrete or pulling down beams. You need the weight, stability and good undercarriage of the 290 for heavy demolition work”, he said.

As this is Smith Groundworks’ second 30-tonne Komatsu, I was interested in how the model has been improved over the last five years. “It’s quite a similar machine, but its more efficient on fuel. It’s probably doing an extra day on a fill of diesel compared to our old machine. The old machine also had a shorter arm, so the extra reach with this one is a big help”, said Shane.

Among the features of the 2022 machine are the KomVision 360-degree camera system, and a full complement of extra work lights. Shane also praised these. “The lights are much better than on the old machine, and the 360-degree cameras are a huge help. I don’t have to slew around to see behind me nearly as much. The lights and cameras work very well together in the dark”, he said.

A piling crew was working on site while I was there, and another task coming up for the Komatsu will be to cut the piles using a pile cropper. “With the extra reach, we will be able to dig out a few extra pads before we go in to dig out the pile caps”, said Shane.
Although the Komatsu machines have been very reliable, Shane said that on occasions when callouts were required or assistance was needed over the phone, Komatsu dealer McHale Plant Sales were on hand promptly to solve the problem.

Komatsu launched the PC290LC-11 in 2015, though there have been refinements over the years since such as improved emissions levels. The machine weighs in at between 29,950 and 32,280 kg, depending on spec. Due to the type of work that Smith Groundworks do, their machine was ordered with a number of extras, such as heavy-duty FOPS guards on the cab, extra hydraulic lines with proportional controls, and a full set of additional LED work lights.

The engine is a six-cylinder, common rail turbodiesel made by Komatsu themselves. Stage V emissions standards are met thanks to an aftertreatment package that includes SCR, EGR and a DPF. Due to the SCR technology, the PC290 requires the addition of AdBlue.

Komatsu have placed the AdBlue tank inside one of the steps, so there is not too much climbing required when refilling. I’m told that the digger is proving to be quite easy on AdBlue versus the older model. Power wise, the engine makes 159 kW or 213 hp. The engine drives the electronic closed-centre load sensing (E-CLSS) hydraulic system.

This matches engine speed with pump output for better efficiency. In a bid to further reduce emissions and fuel consumption, Komatsu have included features such as auto idle – which can be adjusted between five and 60 minutes – an Eco gauge on the home screen, and eco guidance for the operator such as fuel consumption history.

There are six work modes to suit various applications, and hydraulic flow settings for up to 15 attachments can also be saved. In the cab, features like a heated, air-suspended seat, 12/24V socket, automatic climate control, an aux jack, and a hot and cool box make a shift pass more comfortably for the operator.

At the business end of the machine, you’ll find a Miller quick hitch finished in the manufacturer’s signature red paint. A new digging bucket was picked up with the digger, along with a new, larger grading bucket.

Smith Groundworks and Civil Engineering Ltd is based in Hacketstown, Co Carlow and was set up by Pat Smith over 25 years ago. The company carries out a wide range of groundworks, roadworks, civil engineering and demolition works and also holds waste collection permits for the Leinster area.