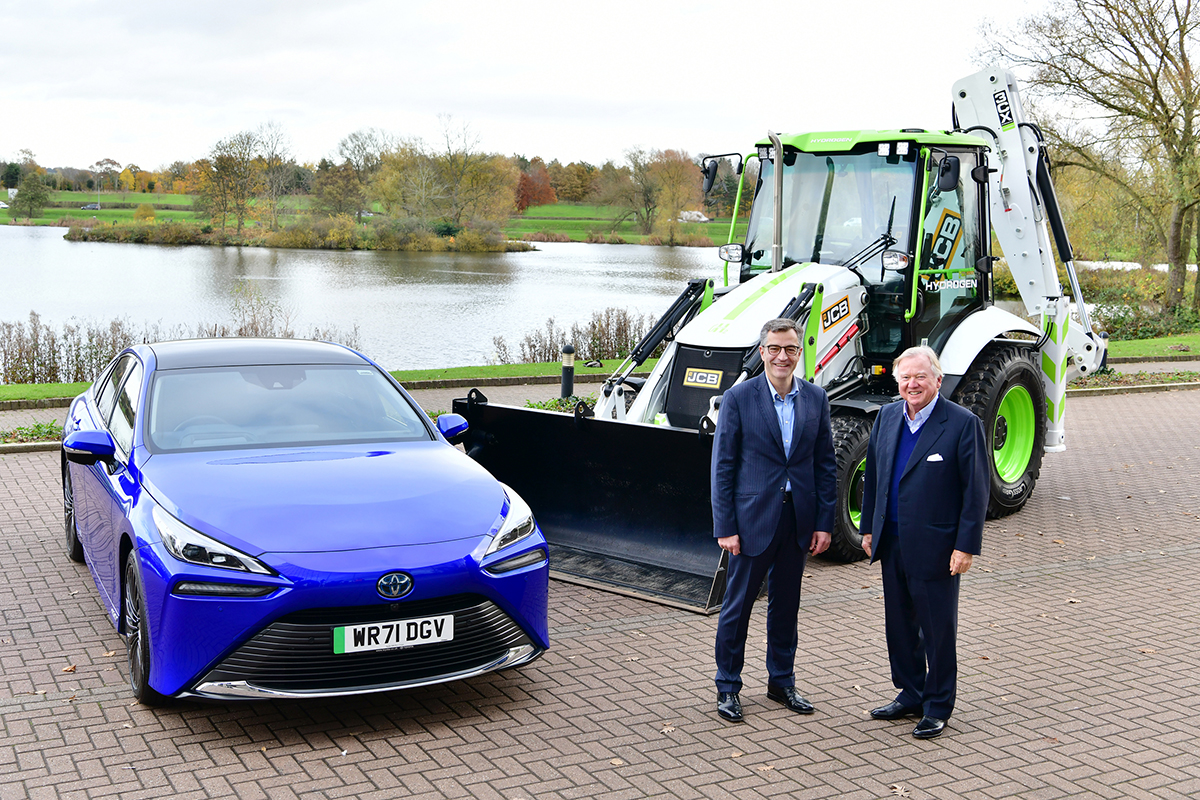 Digger giant JCB has taken delivery of the latest Toyota Mirai hydrogen fuel cell car – just as it develops its own hydrogen engine technology.
The vehicle is among the first batch of Toyota’s second-generation hydrogen-fuelled cars to arrive in the UK since its launch earlier this year.

JCB’s purchase of the Toyota Mirai comes as the company invests £100 million in the development of super-efficient hydrogen engines to power its equipment. The wraps have already come off two prototype hydrogen powered machines: a backhoe loader and a Loadall telescopic handler, which were displayed COP26 in Glasgow.

It is the second hydrogen fuelled Toyota Mirai bought by JCB following the purchase of a first-generation model in 2015. The new Mirai was handed over to JCB Chairman Lord Bamford by President and Managing Director of Toyota (GB), Agustin Martin.

Lord Bamford said: “We applaud Toyota for its consistency in exploring the potential of hydrogen as an alternative to fossil fuels in cars. Indeed, just in the past few months, Mr Akio Toyoda, President of Toyota Motor Corporation, has been testing a Toyota car powered by a hydrogen combustion engine, the same technology that JCB is pioneering for its own machinery. Having a hydrogen fuel cell car in our fleet makes perfect sense as we pursue hydrogen as a fuel of the future.”

Agustin Martin said: “Since 1992, Toyota has produced more than five million cars at its Burnaston plant and our Midlands neighbours at JCB have an even longer history of providing employment, investment and innovation in the region. JCB’s research and development into hydrogen engines marks a significant and forward-thinking shift in the construction and agriculture worlds. It’s exciting to see another industry taking the steps towards decarbonising society through the application of hydrogen technology.”
JCB has manufactured engines since 2004, producing them at plants in Derbyshire and Delhi, India. It is on course to celebrate production of its 750,000th engine this year.

The increased efficiency of Mirai’s fuel cell system, coupled with a 1kg increase in hydrogen capacity, gives the car a range of approximately 400 miles – an increase of 100 miles over the first generation model.
Fuelled by hydrogen, Mirai can be refilled in a matter of a few minutes. It emits only pure water and, through the use of a new electrostatic filter, removes almost 100 per cent of particulate matter from the air, up to 2.5 microns in diameter, as it drives.