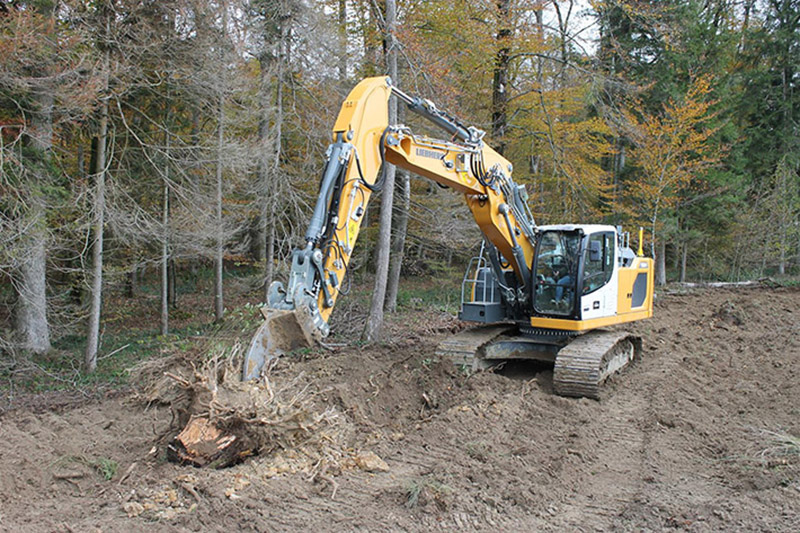 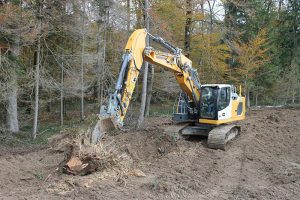 A cost-effective machine and a comfortable working environment
The family company Rokemann: serving customers for over 20 years. “With its great versatility and optimal performance, the R 924 G8 fully meets our requirements”, says Maxime Enderlin, son of the founder of Rokemann, summing up his decision for Liebherr. The Alsatian company decided on the new crawler excavator generation from Liebherr for various excavation and earthmoving jobs. The contractor is impressed by the efficiency and performance of these machines and appreciates the stability, comfort and versatility of the R 924 G8.

Configurations adapted to the application

The company worked in close collaboration with Liebherr’s Colmar factory, to ensure that the configuration of the R 924 G8 provides maximum working efficiency in Rokemann’s specific applications. A variable offset boom for excavating trenches allows operators to work as close as possible to the excavator. In addition, the excavator is equipped with a SLC undercarriage with 700 mm track pads, which was developed specially for the customer and their individual requirement for stability on soft ground. The integration of a GPS system for more precise work in a defined area is another advantage of this machine. In order to guarantee the robustness of the equipment, a reinforcement was fitted under the stick.

Maxime Enderlin is the main operator of the R 924 G8. Apart from the power and stability of the machine, he also appreciates the comfort and quietness in the cab. The operator has a spacious and air-conditioned working area. For pleasant conditions in the day-to-day work environment, the cab is equipped with pneumatic seats with vertical and horizontal suspension, as well as a high-resolution and user-friendly 7″ colour touch screen. The windscreen can also be fully lowered.

The reduced fuel consumption from 17 to 13 l/h between the last R 924 with stage IIIB and this new stage V further enhances the satisfaction of the company.

Roland Enderlin founded the company Rokemann in April 1999 in his home town of Muespach-le-Haut in Sundgau (Haut-Rhin, Alsace). The company quickly outgrew its site and as such relocated to a larger space in Waldighoffen to accommodate its expansion plans. Rokemann celebrated its 20th anniversary last year. It has 7 employees, including Roland’s wife and two sons, and is mainly involved in the area of agricultural excavation work such as overland and forestry routes. Rokemann has had Liebherr crawler excavators since 2000, the first was an R 904.

In 2018 a Liebherr A 910 Compact wheeled excavator was also purchased. Full maintenance contracts are in place for all machines for regular and simple servicing.