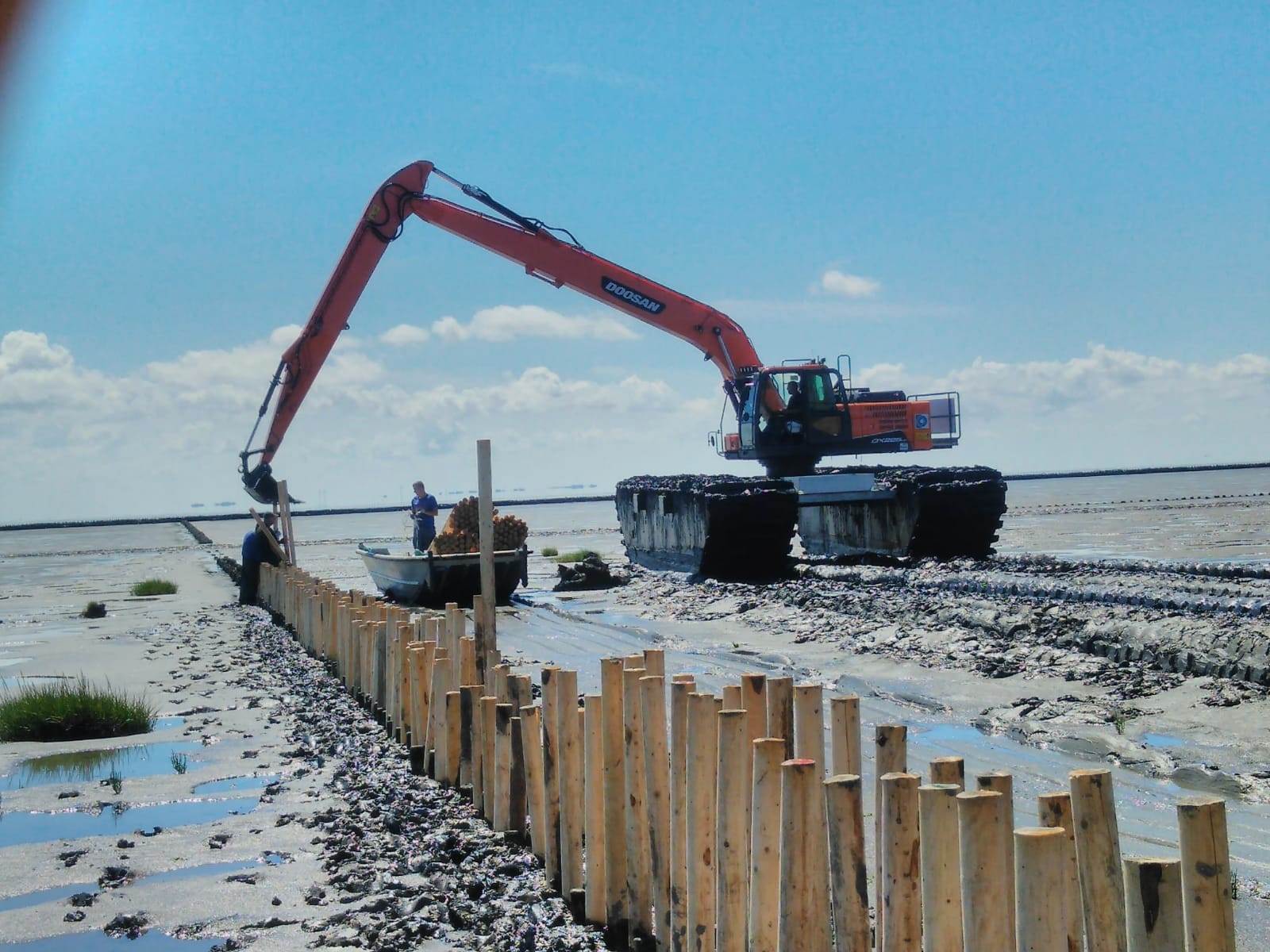 A new 22 tonne Doosan DX225LC-5 crawler excavator has been converted into an ‘all-terrain’ machine for contracts being carried out in the Wadden Sea in Germany, by the company, Sven Jacobs Tief-, Garten- und Landschaftsbau, based in Tating (Schleswig-Holstein). The conversion of the Doosan excavator supplied by local Doosan dealer, Atlas Hamburg GmbH, was completed by OLKO-Maschinentechnik GmbH from Olfen (NRW). 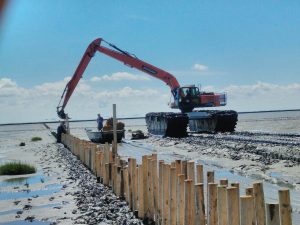 The main application area for the new all-terrain excavator is the approximately 11.3 km long Hindenburgdamm embankment, which connects the island of Sylt with the mainland in Germany. Around 8.1 km of the Hindenburg embankment runs through the Wadden Sea.

To prevent the standard Doosan 22-tonne crawler excavator from sinking into the water, a particularly low ground pressure is required. For this purpose, Jens Mewes, from Sales at Atlas Hamburg, who has been working with the Jacobs company for four years, contacted OLKO-Maschinentechnik to carry out the conversion needed. OLKO has mounted the superstructure of the Doosan DX225LC-5 on an all-terrain undercarriage, not a standard pontoon, to ensure the full manoeuvrability of the excavator has been maintained.

Jacobs has been using Doosan excavators since 2014 and the new machine is the fifth Doosan crawler excavator they have purchased. The DX225LC-5 features the same new distinctive engine design that characterizes all the excavators in the latest Doosan LC-5 generation and is powered by the proven water-cooled Doosan 6-cylinder DL06P turbo-charged diesel engine that delivers 124 kW (168 hp) at 1800 rpm. This provides more than enough power and high torque at a lower speed. 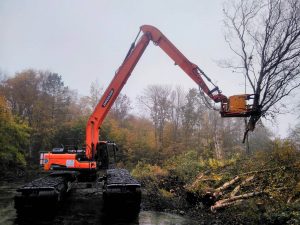 The OLKO undercarriage is designed for difficult applications in adverse conditions and on challenging surfaces, such as those found in, for example, wetlands, as well as performing environmentally friendly work in sensitive environments. It also makes it possible to carry out work on lakes, rivers and coastal areas. The type U/1800 undercarriage used on the Doosan DX225LC-5 has a length of 10.80 m, a width of 6.20 m and a height of 2.35 m. The undercarriage alone weighs around 27 tonne and produces a buoyancy of 580 kN. It achieves a load capacity of 18 tonne and a maximum speed of 4 km/h.

In addition to the conversion of the chassis, a number of other modifications were made by OLKO. This included fitting the crawler excavator with a 9 m boom and a dipper stick 6 m in length. The extended reach makes it possible to work underwater without any problems. In addition, a supplementary fuel tank and a shelf for an anchor were installed. In order to comply with environmental regulations, the machine was converted to biodegradable Panolin hydraulic oil. OLKO ensured that the finished machine is certified with the CE mark and accompanied by the documentation required by the EU Machinery Directive.

Atlas Hamburg GmbH, founded in 1982, is part of the Wehl Group, which employs 232 people. Since 2012, Atlas Hamburg has been the Doosan dealer for the areas of Hamburg, Northern Lower Saxony and Schleswig-Holstein. In addition to the sale of new and used equipment, the company also offers its customers a comprehensive rental fleet and a wide range of other services. The dealer also offers vehicle construction and painting services. 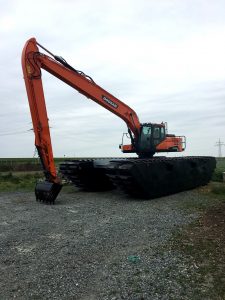 Since the founding of the company in 1989, OLKO-Maschinentechnik GmbH from Olfen has been one of the driving forces in the field of shaft construction and conveying technology. With mining in the region declining sharply in recent years, the company has been looking for new business opportunities that promise long-term growth. As part of this process and introduced for the first time at the Conexpo 2017 exhibition in the USA, OLKO has concentrated on all-terrain machines as a niche segment of the construction machinery market. The conversion of the Doosan DX225LC-5 is the first project the company has completed in Germany.