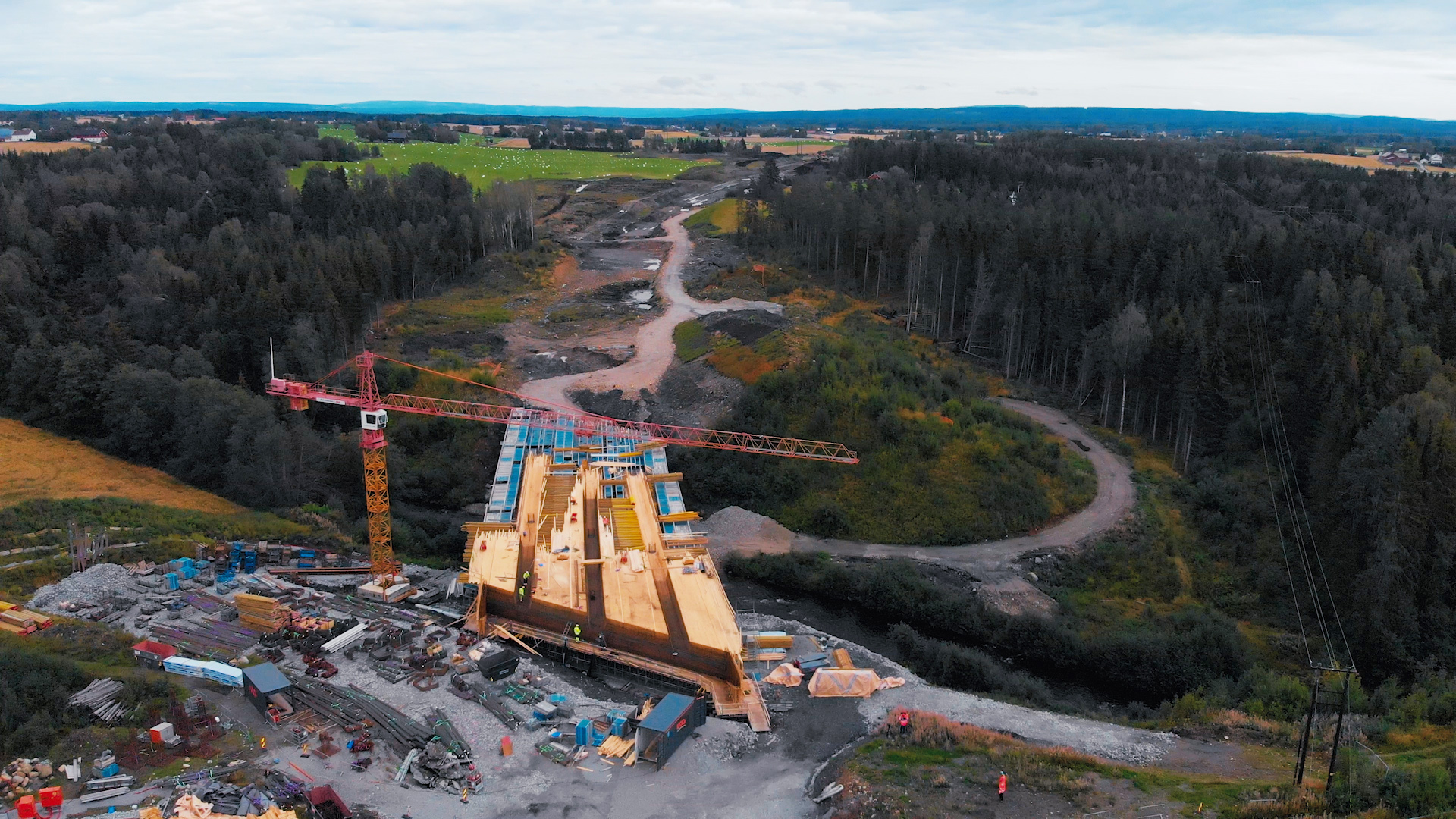 Twenty-seven kilometres in length, up to four lanes in width and with 28 separate civil engineering structures, Riksvei 3/25 is one of Norway’s biggest and most critical national roads, connecting Oslo in the south and Trondheim in the north. So, when it came to improving the road – aptly called the Green Shortcut (Den Grønne Snarvei) due to its passing through tranquil, natural landscapes – the project would always prove a major feat in planning and engineering for the Norwegian Public Roads Administration.

“I’ve worked on this project for about 10 years,” said Arne Meland, project manager at the
Norwegian Public Roads Administration. “The big idea is to establish a good road connection through Østerdalen, but to do that involves moving a lot of soil and rock masses and handling different types of terrain.” Alongside these geological challenges, safety and environmental measures also needed detailed consideration. “Traffic safety is always the most important aspect, but limiting the impact on the environment and the local community is crucial, too.”

With a complex brief, the Norwegian Public Roads Administration began a comprehensive bidding process focused not only on each contractor’s experience and capacity to deliver but, most importantly for a project of its scale, their capability to plan and schedule effectively. Following proposals from five contractors, Skanska was appointed to the project in 2018.

Key to Skanska’s appointment was its emphasis on optimising cut and fill quantities as well as minimizing mass haul distances, while maintaining safety and quality. At the heart of this optimisation was Topcon’s MAGNET Project software.

A streamlined digital earthworks workflow, MAGNET allows customers to visualise all project data in one view, evaluating different design options and instantly seeing how they influence the cost, creating realistic and accurate earthworks plans. It also allows location-based construction planning and scheduling, helping to tackle traffic planning, safety, delays and resource conflicts all in one place.

For Skanska and the Green Shortcut, MAGNET brought several benefits, namely its ability to identify cost and time saving construction and design solutions, as well as optimising the mass haul. Marcus Wiksten, business development manager for Topcon software solutions, explains: “The software includes optimisation technology. This means the Skanska team could coordinate the 120 diggers, lorries and dumpers on site and then recreate movement to reduce transportation, while making sure everything is where it needs to be.”

Lucia Calzado Teruel, planner for Skanska, agrees on the difference MAGNET has made to the project’s efficiency: “You get all the information on mass haul, line-of-balance plans, Gantt charts and reports in one file. Before I started using MAGNET, I needed different files that didn’t work together. MAGNET is much more time efficient and ensures you deliver high quality work.”

The software’s ability to model and simulate scenarios before they happen in the real world has also proved fruitful on Riksvei 3/25 thus far. Niclas Törnroos, who was the project planning consultant from Topcon working for Skanska in the bidding stage of the project, said: “In the first stages of planning, MAGNET was used to study how changes to the road alignment could get the most effective use of soil and rock masses. Original thoughts were to move approximately four million cubic metres of loose materials and replace it with two million cubic metres of crushed stone back on top.” Tom-Arne Gullord, project engineer at Rv3/25, commented: “By using MAGNET to optimise the mass hauls and scheduling, Skanska was able to reduce the mass that needed to be moved, which in turn cut costs and lessened the environmental impact.”

Overall, MAGNET Project has helped to reduce planning and construction budgets on Riksvei 3/25 by 20 per cent and continues to support Skanska and the State Highways Authority in its environmental objectives. The software has also helped to significantly reduce the construction period of the project. The road, which was due for completion in late 2020, is now scheduled to be opened three months ahead of plan on 30th July. The project also aims to achieve a CEEQUAL certification and create a 20 per cent reduction in greenhouse gas emissions. Using MAGNET Project’s planning capabilities, Skanska has been able to cut down transport trips and limit the amount of invasive work required to date.

Concluding on the role of Topcon in Den Grønne Snarvei, Ketil Sand, project director at Skanska, said: “Topcon’s contribution is partially MAGNET software and partially having access to people who are highly skilled in using that software. The key to success is the harmony between software, key people and our own staff; Topcon has been very important to this project.”