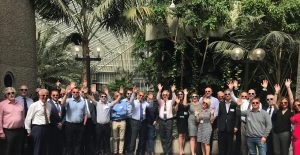 The sun shone on the Barbican Centre in Central London last week as members of the UK and Irish Press alongside, Plantworx and Railworx team members, CEA (Construction Equipment Association) Directors and East of England Showground staff gathered for the official launch of the Plantworx and Railworx show, which will be taking place at the East of England Showground in Peterborough from 11th – 13th June 2019.

Rob Oliver, Chief Executive of the CEA (Construction Equipment Association) kicked off the day’s proceedings and promised an ‘exciting new venue and a bigger and better show’.  JCB Director and CEA Honorary President, David Bell, who is a true advocate for the show, was next to address the audience.

In his speech David said, “Manufacturers have to find the best value for money in spending their marketing budgets, and today with so many digital ways of reaching our customers, plant and machinery shows have to do what can’t be done digitally. So Plantworx and Railworx provides us with the perfect platform to see machines in the ‘flesh’, for which there is no substitute.”

David added, “These are exciting times for manufacturers – new innovations to meet the ever-increasing need for efficiency – new developments to meet customer demand and many new products for us to showcase.  With these factors in mind – bringing together Rail and Construction in one event, makes absolute sense.

Wherever rail infrastructure is put in place, alongside the direct rail specific equipment, there is always supporting infrastructure that requires more generalised construction machines. This is especially true with HS2, where its success is totally dependent on bringing together the supporting residential, commercial and high-tech building networks around the station complexes.”

Kevin Minton, Chief Executive of the CPA (Construction Plant-hire Association) was unable to attend the event as the CPA were holding its annual Stars of the Future Plant Mechanic Apprentice awards ceremony.  However, Kevin did send words of support for the Plantworx and Railworx event, he said, “CPA is looking forward to the 2019 event which should be a great meeting place for our Members and an opportunity for them to see the latest products and technology on offer. The East of England venue looks like a very good choice.”

From the very first Plantworx in 2013, the show has had the support of Government, the new collaboration with Railworx has also received words of encouragement from Baroness Fairhead, the Minister of State for Trade and Export Promotion at the Department for International Trade.

The Baroness stated, “The UK construction equipment industry has a proud record of achievement in manufacturing, exporting over 70% of what it produces to markets across the world.

“With major construction projects in rail, roads and infrastructure underway, the Plantworx and Railworx exhibition, provides a great opportunity for businesses to meet and source the innovative products and technologies that are the key to driving future growth in the sector, in doing so supporting increased exports which will create jobs across the UK.”

Next to talk was Show Director, Simon Frere-Cook who presented the floor plans of the show and highlighted the new key features which include a purpose built indoor arena, which will replace the pavilion marquees that were erected at previous shows.  Simon also explained that the new venue benefits from permanent walkways, excellent communication with efficient Wifi and mobile networks and parking for 22,000 cars.

Simon added, “In 2019 we are expecting 500 plus exhibitors to sign up for the event with the addition of the Railworx exhibitors – in 2017 we had 396 companies at the event.

The Plantworx show to date has 90 confirmed exhibitors including leading OEM’s such as Marubeni Komatsu, Cat Finning, Mecalac, JCB, Thwaites, BOMAG and Takeuchi.

Thwaites UK Sales Manager Andy Sabin sent words of support for the show he said, “We have supported this event from its inaugural show back in 2013 and see it as a key activity in our exhibition calendar. The show is always well attended and the visitors we attract to our stand are well matched versus our expectations”.

Thwaites serve through their UK & Ireland distribution network the key markets of Construction, Rental, Housing and Infrastructure. Driven by a growing sense of confidence in these sectors Thwaites have seen a steady increase in enquiries with the outlook remaining strong. With major rail projects such as Bank Station, the expansion of the Northern Line and Phase 1 of HS2, Thwaites welcomes the expansion of Plantworx 2019.

Concluding Andy Sabin went on to say, “We look forward to meeting customers and stakeholders attending the joint event from Railworx, to further develop our relationships and explore additional opportunities in this key and growing market.”

Finning Cat Compact General Manager, Janine Turner also sent over a positive message in support of the show she said: “In 2019, Finning look forward to continuing the dialogue with the growing number of SME customers from the Housing, Plant Hire, Groundworks, Landscaping and Owner Operator markets. We warmly welcome the widening scope of the event, with the inclusion of Railworx, as the Rail and Infrastructure sector represents a significant opportunity for our General Construction & Infrastructure team.

Together, both shows will offer increased awareness and exposure of the needs of these exciting industries and how the capabilities of Finning and Caterpillar equipment can support them.”

Rob Oliver CEO, CEA also confirmed there will be a new Innovation and Technology zone at the show, he said, “The digitalisation of the construction sector is gaining pace – Plantworx offers the perfect showcase to help match the technology with its acceptance by the marketplace. Plantworx will support the aspirations of the CEA’s Digital Adaptation Group – and the digitalisation initiatives being promoted by the Committee for European Construction Equipment (CECE).”

Jolene Price, Director of Rail Media, introduced the Railworx element of the show highlighting the current significant investment in rail using examples such as Network Rail who are intending to spend £34bn during it latest procurement drive, CP6 which is in operation from 2019-2024.  Also, HS2 which is investing £56bn including £6.6bn for phase one civils contracts. Crossrail 2 which represents an investment of £30bn+ and the £5bn to be invested through new Wales and Borders franchise.

Jolene said, “These are just a few examples of the major programmes of works that will be completed in the next decade or so. This list alone represents more than £130bn in new and upgraded infrastructure – not including plans for new tram routes and extensions to the London Underground and Overground networks.

Rail is a growth industry that is critical to the UK economy, supporting new housing and regeneration projects around the country. As well as supporting hundreds of thousands of existing jobs there is also a huge demand for new skills, particularly for the delivery of HS2 and the rollout of new modern signalling technology across the existing network.”

Jolene concluded the Rail Media Railworx presentation stating how Railworx will complement and enhance Plantworx she said, “Railworx will be an opportunity for suppliers to display specialist equipment, such as road rail vehicles (RRVs), tampers, rail movers, rail vacs and wiring trains.  It’s also an opportunity for manufacturers and suppliers to meet those operating, buying, and specifying tools, plant and equipment.  The event will also forge closer links between rail and the wider construction industry.”

CEA Director and Head of CEA’s Skills Council Nigel Baseley was the last of the days presenters.  Nigel highlighted the importance of Skills in both the construction and rail sectors and spoke about Plantworx commitment to Primary Engineer and the Student Event at the show – he said, “The CEA and Plantworx has been working with Primary Engineer, by way of sponsorship and supporting engineers, since the 2017 event and are also set for a second consecutive year with more than 15 Coventry Schools committed to taking part in the project in 2018. This STEM project is vital to encourage young people into our industry – we need young engineers to ensure the future growth of our sector.

The CEA and Plantworx have also confirmed that the Primary Engineer event will be coming to Plantworx and Railworx in 2019 working with the Primary and Secondary Schools in the area and will be making the event bigger than before with more schools involved.”

Nigel added, “On the last day of 2019 Plantworx and Railworx will be inviting students from local schools to take part in the Student Trail, where the children will be encouraged to follow an organised trail visiting participating exhibitors answering an ‘engineering’ related question about the company’s products. Our exhibitors have been very supportive of this initiative and understand the need to introduce children to our sector at a young impressionable age.

Nigel concluded the ‘Action on Skills’ part of the presentation with the CEA’s response to machine distributors’ training needs. “The CEA has been involved on the development of Trailblazers standards for some time working with with Landbased Training & Education Committee (LETEC).  We are delighted to announce that we now have two standards approved by IfA – Level 2 Service Engineer and Level 3 Technician. The CEA also has a joint promotional plan with Agricultural Engineers Association (AEA) which will include Plantworx.”

The day concluded with a celebratory four course lunch on the garden terrace at the Barbican.  Guests were presented with promotional gifts of Plantworx and Railworx branded sun glasses and rain ponchos.  Rob Oliver said, “Whilst we can’t do anything about the British weather we can prepare you for every eventuality!”

A video of the showground can be viewed here on YouTube https://youtu.be/JuA2Bj1ICkI