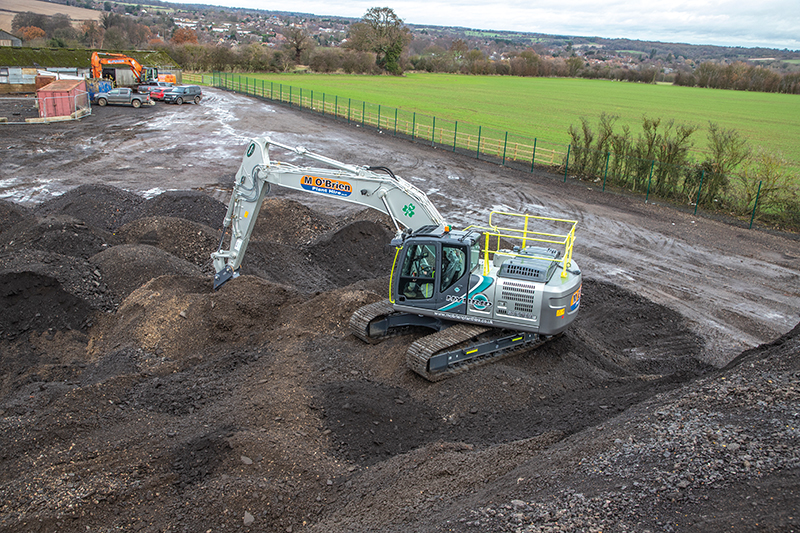 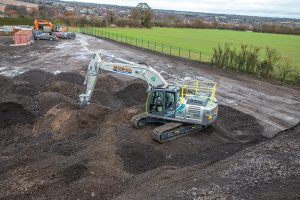 St Albans-based plant hirer M O’Brien has just taken delivery of its first hybrid excavators, and is excited about the prospect of delivering advanced efficiency to its customers. Geoff Ashcroft reports.

St Albans-based plant hire firm M O’Brien is no stranger to specialist kit. Since starting the business in 1990 with one JCB 3CX, Michael O’Brien quickly grew his operation and choosing the best machinery to provide a high-quality service, along with reliable staff. Operating nationwide, the business currently operates a diverse fleet of wheeled and tracked excavators that includes long-reach, tunnelling, trenching and telescopic variants, to deliver a complete solution from 500kg up to 50-tonne excavators. In addition, the fleet includes site dumpers and ADTs, compaction rollers, telehandlers, dozers, tractors, crushers and screeners. And a fleet of 50 eight-wheelers ensures muck-away and sand and gravel requirements, are suitably met.

“Ours is a diverse business that doesn’t stand still,” explains Michael’s son Dan, who together with his younger brother, Connor, are helping to push the M O’Brien Group of companies forward (see box M O’Brien Group of Companies). Now the company has added a pair of hybrid excavators to its 600-strong machine fleet, and their arrival is being viewed as something of a turning point for the St Albans based hirer. Those two hybrid machines it has purchased are Kobelco SK210HLC models, supplied by Molson. There is no denying that the bright silver excavators do stand out from the company’s orange back-drop of what is effectively a predominantly Hitachi-flavoured fleet. “Around 50-60% of our excavators are Hitachi models,” explains Dan. “We do run a few Cats and Hyundais too, and there’s some older Case E-series still giving good service too.

But it’s been 10 years or more since we’ve had any Kobelco excavators on the fleet.” To help the new hybrids stand out, the firm has over-looked the standard Kobelco blue livery and opted for the eye-catching metallic silver paintwork. “There’s no point having such a cutting-edge piece of technology dressed in its standard livery,” he says. “A silver digger is one that will draw a second look. There are not many around at the moment, so these will certainly get plenty of attention.” And that’s quite a selling point for the business. Very few hybrid excavators hold the same visual appeal as the metallic silver Kobelco, and from a promotional stand-point, that’s good news for the M O’Brien brand. “But buying this latest excavator technology wasn’t a decision we’ve taken lightly,” he adds. “We probably would have looked to Hitachi first and foremost, simply because of our fleet make-up.

But there Hitachi 21 tonner is not yet available, and from what we’ve seen, the Kobelco should be equally as impressive.” He adds that there is a considerable additional cost of buying into this type of new technology, and unfortunately, he reports there is little opportunity to recover that cost through an increased hire rate. So it could easily be argued that the silver hybrids are little different to any other 21 tonner, save for the ability to carry out the same role as a conventionally powered 21-tonner while burning much less fuel. So you could be forgiven for asking why the firm taken such a bold step? “Firstly, there is growing demand among our customers, and they can see many benefits, including lower fuel consumption,” he says. “Secondly, it brings a huge amount of kudos to those working in urban and city environments, and it promotes low emissions and high efficiency.” “It’s almost a best-practice scenario, and we expect these two machines to be almost exclusively based within London,” he says.

Super capacitors have been the electrical energy storage device of choice for many excavator manufacturers – but not Kobelco. It has chosen lithium ion (Li-ion) batteries which have become well-proven in the automotive industry, and engineered a 200kg lithium-ion battery pack into its 21-tonner. It argues that super-capacitors are quickly charged and discharged, and the rapid emptying of electrical power is said to make it more challenging to maintain a consistent power output for the entire machine, without suffering spikes in operating performance. By comparison, battery storage delivers a smoother and more controllable power source to deliver a near-constant flow of power, making engine fuel management much more efficient. The SK210HLC is based on Kobelco’s dash 10 excavator. In addition to the battery pack, key hybrid components include a motor/generator system that is integral to the 166hp four-cylinder Hino engine’s flywheel assembly, plus an electric slew motor.

Clever power-electronics within the machine’s inverter manage the generation and distribution of electrical power, along with the constant charge and discharge cycles for the battery pack. And this is where the Kobelco hybrid gets really clever. Power for the electric slew motor can be supplied from both the battery pack and the motor/generator. When the operator releases the slew lever, and the upper structure is braked by the electric slew motor which recovers energy that can be put back into the battery pack, or fed directly into the motor generator to assist the engine. Stored energy from the battery pack can also be directed to the engine if required. And when the slew function is not being used, the motor/generator continues to supply power according to demand. It is really clever stuff, with graphics on the in-cab monitor showing the flow and direction of power. Kobelco’s system can feed up to 34hp back into the engine through the motor/generator. But you don’t get a combined total of 200hp (166hp from the engine plus 34hp from the motor generator). The electronics will automatically adjust engine mapping to remove up to 34hp from the engine’s output. You’ll always get 166hp to use, but it’ll come from the engine and the hybrid system. When the hybrid systems delivers 100%, the Hino power unit can ease back to around 132hp, and this is how the SK210HLC offers such an impressive reduction in fuel consumption.

This machine boasts a 12.3% reduction of fuel consumption in H-mode, when compared to its non-hybrid SK210LC stablemate doing the same task. Fuel efficiency improvements from the hybrid components has enabled the DEF tank to be reduced in capacity from 83 to 34 litres, freeing up additional space for the high-density battery pack. The li-ion battery pack is protected physically and electronically. Tan integral battery warming system takes care of cold weather operation, ensuring the charge and discharge functions operate without compromising on performance. If the battery temperature drops below 15 degrees C, the operator will be prompted to trigger the heating process from an in-cab switch. Kobelco’s machine performance data suggests that a DEF tank refill is needed every five fuel refills. The whole hybrid integration is seamless and invisible to the operator, and the amount of power taken from each source (battery and engine) is continually varied to provide a constant peak power of 166hp. Unlike other hybrid systems, the Kobelco does not trick your mind with fluctuating engine rpm – it runs at a constant speed, according to your mode and throttle position.

Given the skills shortage in the industry, Dan O’Brien says that hybrid excavator operation needs to be identical to any other excavator. And that was part of the attraction with the Kobelco machines. “Operators need to get the best out of any machine in any given application – but it needs to be a seamless process,” he says. “We do provide a lot of training, not just for the excavators, but also for the additional capability we bring to the job site.” “This includes how to correctly set and use height restrictors, slew restrictors and safe load indicators too,” he adds. “The last thing they need to do is understand the finer workings of a hybrid to get the best out of them – we expect this technology to blend in and work in the background, as if you’re sat on any other excavator.” Specification for the two hybrids includes the integration of a GKD Technologies’s 2RCi load monitoring system. As part of the SensorSafe range, this package includes SensorLoad, SensorHeight and SensorSlew. These systems electronically monitor the machine and can be configured to optionally control the load, height, reach and slew of the excavator – ideal for working in confined areas or perhaps on narrow carriageways. In addition, the two excavators have been equipped with Synergy Automotive Electronics’ smart vision 360-degree camera system, offering an all-round birds-eye view in addition to the rear-view camera system.

“We’re always looking for ways of taking safety forward, and this type of technology is a useful addition to protect our operators and those working around them,” he says. “We take safety very seriously.” Another example of practical site-safety is the recent installation of the FHOSS Halo light system onto one of its 14 tonne wheeled excavators. “We’ve recently trialled the FHOSS Halo with the BAM Morgan JV project to further highlight the awareness of risk identification with the people-plant interface,” he says. “The Halo system projects a ring of solid red light around the machine to define an exclusion zone, and we’re hoping to improve this system so it remains visible in daylight too.” Dan O’Brien says that while the two Kobelcos also represent the firm’s first two hybrid excavators, their arrival will give them a benchmark in terms of machine performance and efficiency. “We’ll put our own operators on them to start with, so we can get the best out of these new machines in any given situation,” he says. “While construction sites pay for fuel, they do get access to machine telematics so they too will be able to see how fuel efficiency and performance stack-up.” “And we’re expecting the less frugal machines to be the ones that are off-hired first, so our hybrids should stay on-hire for much longer.” While it is clearly early days for the M O’Brien hybrid excavators, one thing is for certain, they are on the fleet to stay. “These are unlikely to be our last hybrids, either,” says Dan. “This is just the beginning of a new phase of high-efficiency operation.”