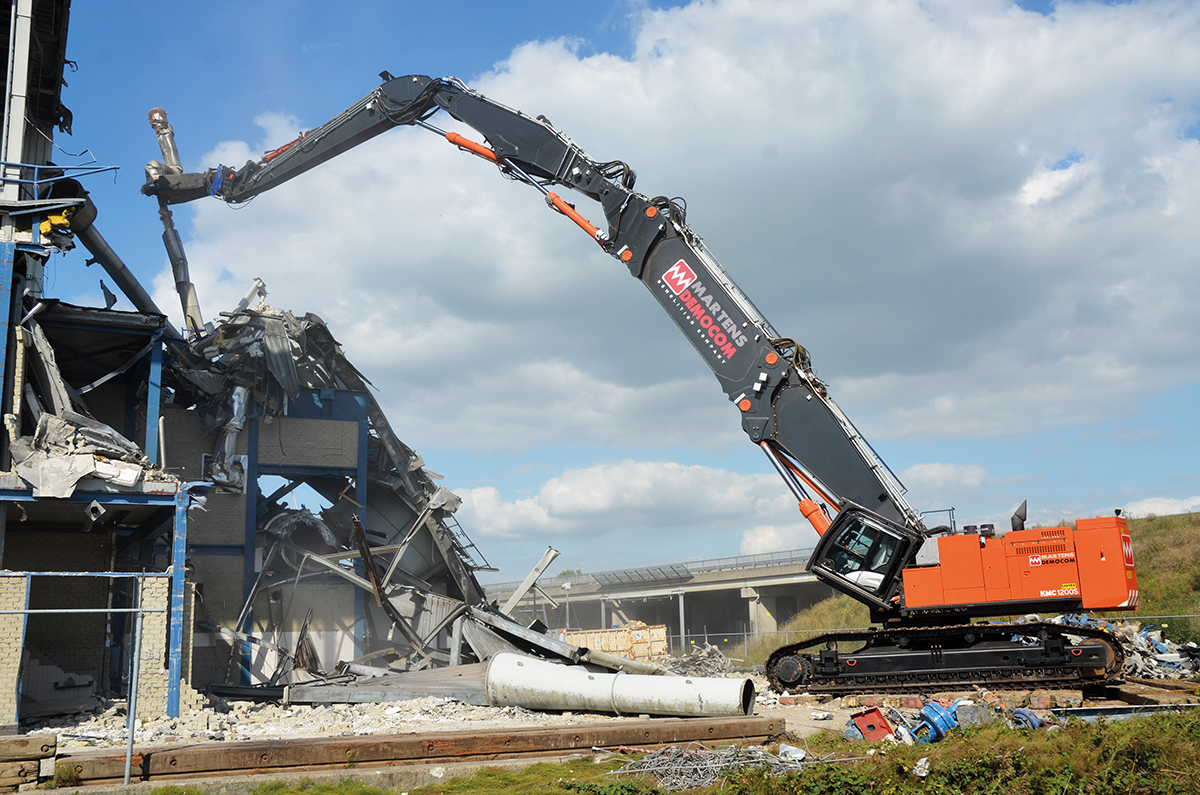 Imagine taking an 85-tonne Hitachi ZX890-6 and transforming it into a 170-tonne demolisher. Such a machine exists, as Steven Vale discovers.

CALLED the KMC 1200S, the monster wrecker which thrilled the crowds as a world premiere at last year’s BAUMA is the result of joint development work between KTEG (subsidiary of German Hitachi importer Kiesel) and Hitachi. Bought by Belgian demolition company Martens Democom, after leaving the German show, the press swarmed over the KMC (KTEG Multi Carrier) 1200S at its first job to demolish a redundant grain silo complex in the Grand Duchy of Luxembourg.
With this job completed, and the paparazzi’s interest waning, seven trucks moved the excavator, which by now was dubbed by some as the Demolition Dragon, and by its owner as the Red Dragon, to Belgium to topple a second building in the town of Genk.

It remained in the country for its third job to take down a hospital in the heart of the Belgian town of Leuven, which is where we caught up with it. Supplied by Belgian Hitachi importer Luyckx, the ZX890 continues to take its power from the standard 520hp/382kW six-pot Isuzu engine, but the bespoke undercarriage and demolition booms were fabricated under KTEC supervision by Dutch engineering company STC.
As well as several Triple Articulated Boom (TAB) configurations, the 1200S also has a 51m high-reach demolition arm, and we timed our first visit to see the six pinned sections stretched to full height. Comprising a 24.5m main boom, 11.5m two-piece mid-arm and 14.0m main stick, the 890’s standard 850kg main lift cylinders were no match for the bespoke boom.

Initially, the plan was to order a pair of custom-made main versions, but in the end, it was decided to use as many standard off-the-shelf components during the modifications as possible.
Over 4.0m long, the 2.2-tonne (280mm bore) main lift cylinders at the base of the modified ZX890’s boom are normally found on Hitachi’s 190-tonne EX1900-6. The auxiliary stick cylinder comes from an EX1200, the main stick cylinder from a ZX690 and the bucket linkage at the end a ZX350.

Not having a quick-change system at top saves weight and allows a bigger tool to be fitted. At the top, the weight of the 2.5-tonne Epiroc 2500R increases to the maximum 3.0t with adaptor plate.
With the attachment lowered to the ground, the lunch break provided an opportunity to chat with seasoned operator Peter Severijns. It also allowed us to take a closer look at the excavator, which has all the usual trimmings associated with a high-reach machine, such as a tilting cab, extra guarding and a dust suppression system.

I could not help but notice the slew ring. The heavier boom meant that the 890’s standard version was replaced by something quite a bit stronger. The precise details of the bespoke arrangement are off-limits, but considering the size of the main lift rams, it is clearly much stronger than the standard one. 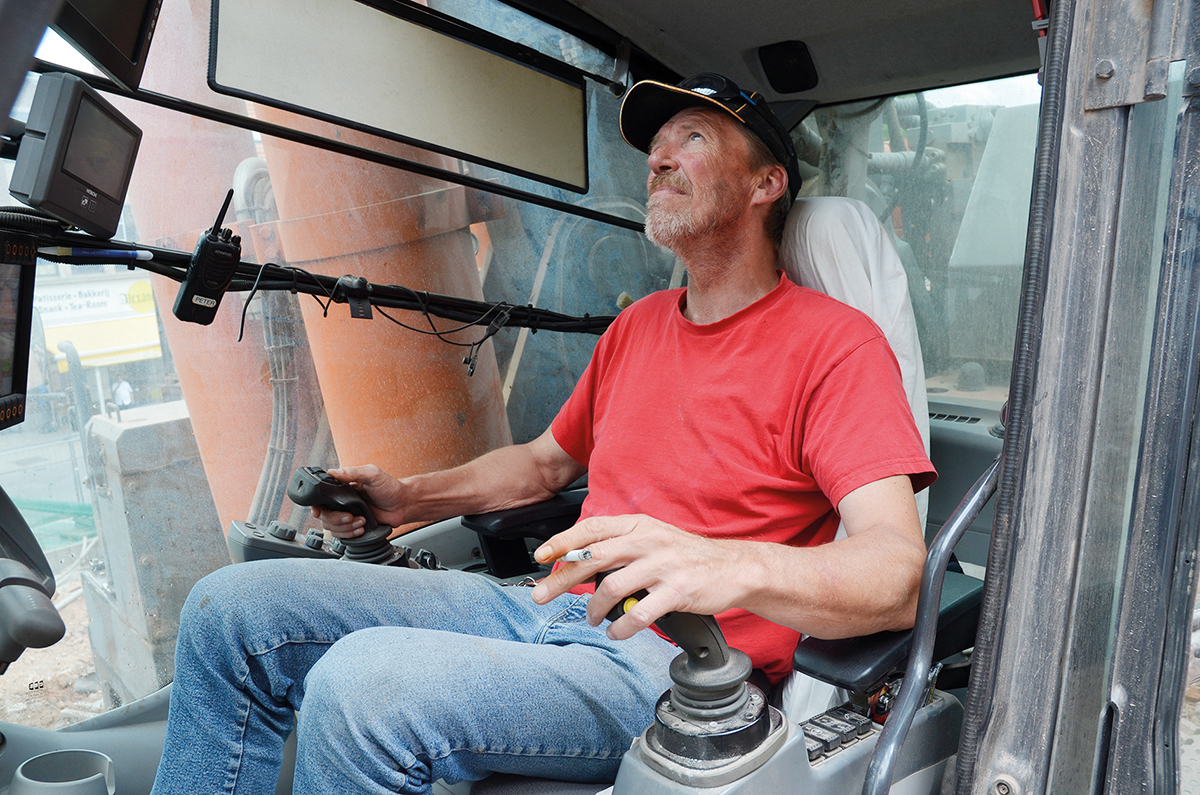 The custom-made undercarriage is worth closer inspection. Unlike many other bespoke high-reach demolition excavators, there is no hydraulic mechanism to slide out the tracks to increase stability on site and withdraw them for transport. Instead, the fixed undercarriage on the KMC 1200S is always at maximum width. Too wide to transport, an additional hydraulic cylinder was inserted (winch also available for new machines) between the two main lift ones. This extra cylinder allows the excavator to lift off and fit its 8.0m long (2.0m longer than standard ZX890) and 16.0-tonne tracks without any assistance from a mobile crane.
With the demolition arm removed for transport, and the excavator’s rear counterweight lowered, four jacks (two at the front and rear) raise the chassis and tracks clear of the ground, allowing a lowbed trailer to reverse under it.

Peter has to loosen the locking pins and manually turn the jacks to the work position, but lowering and raising them is done from a remote-control unit. This same portable device is used to slide in/out the track unit locking pins, and lift and lower the excavator’s heavier 30.0t (13.3t on standard ZX890) rear counterweight.
With the tracks clear of the ground, the operator sits in the cab and turns the top half of the excavator to the side. Using the joystick, the additional cylinder hooks onto the side of the track frame. The process is repeated on the opposite side and the base machine, minus boom, tracks and counterweight, which has a width of below 3.5m and weighs around 67 tonnes, is designed to transport as easily as possible on European roads.

The operator reckons it takes two men the best part of a day to pack up the excavator for transport and a similar time to assemble it. The previous ZX870 was much faster, taking just 2-3 hours. The tele-boom came off as one load and the tracks quickly slid in for transport.

However, as Marten Democom’s Erik Vanstraelen points out, machines of this size are generally only relocated 8-10 times a year. “Whether it takes a few hours or a day to move is irrelevant,” he says. “The important thing for us is that the rigid boom is much stronger than a telescopic version.”

The Belgian-based demolition company is well known in international circles, and over the years its machine fleet has included a couple of bespoke Hitachi ZX870 telescopic creations from Kocurek; a 44.0m 110-tonner and a 48.0m 145-tonne version. Also, how many demolition companies can you think of with a couple of standard Komatsu PC1250s on the books? As well as spending stints pulling the levers on these and more extreme machines, experienced operator Peter also piloted a 40.0m (rigid) Cat 385 for 14 months.

His previous mount was a five-year stint on the 48.0m Hitachi ZX870 tele-boom, which went on to notch up over 7,000 hours of high-reach work, before being sold to a North American demolition contractor.
The controls on the KMC 1200S are all electric and took a while to set up correctly, and Peter misses being able to quickly alter the working height while standing in the same position with the telescopic boom. “I need more space with the 51.0m pinned section fixed boom, but it is much stronger. There is no going back.” 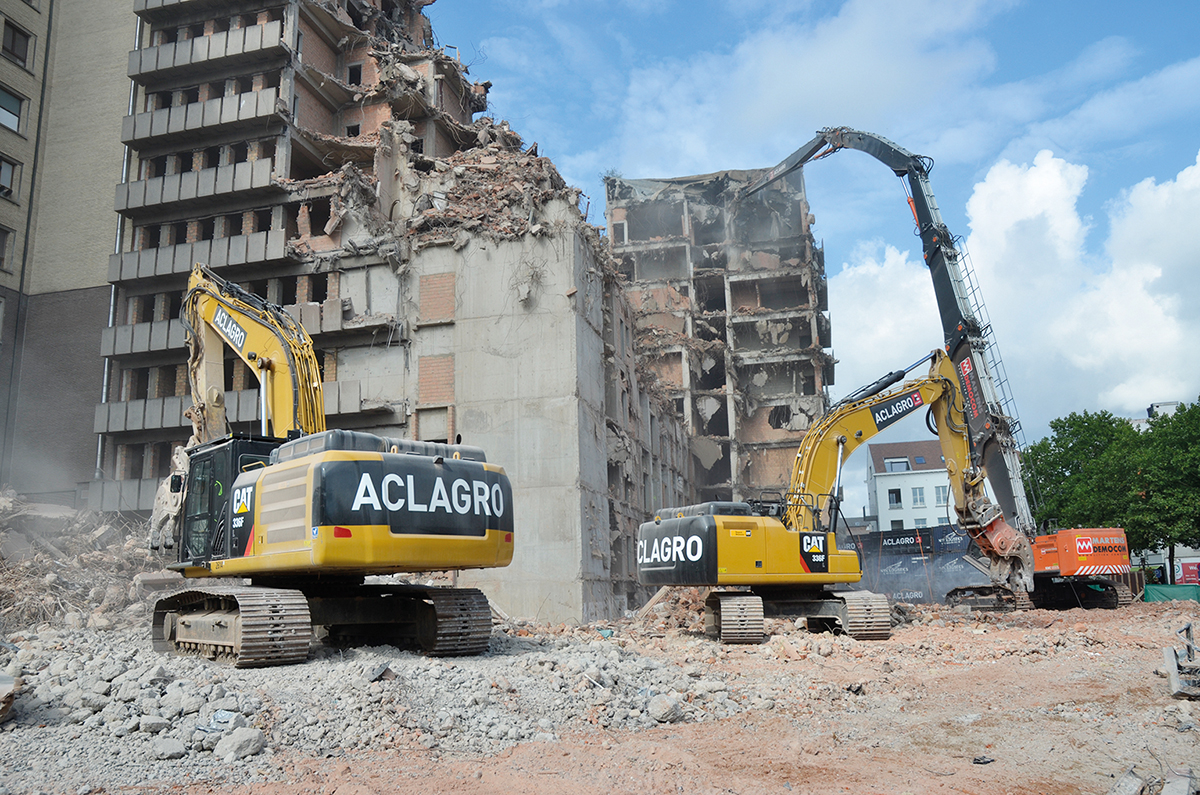 It wasn’t needed at the Belgian hospital job. With the top floors removed, it was over to main contractor Aclagro’s Volvo EC750 to take down the rest of the structure.
The 51.0m high-reach arm was packed up and trucked back to Martens Democom’s base in Genk, but the excavator travelled north and crossed the border into the Netherlands where it was joined by its longest TAB or triple boom. Used at the first and second jobs, we had to wait until the following week to see it in action at the excavator’s fourth job; Dutch power plant number three for Martens Democom in the town of Bergen-op-Zoom.

Up until a couple of years ago, the Belgian company’s demolition fleet included an extreme TAB version of the Hitachi EX1200, which by the time Kocurek had finished with it tipped the scales at around 220 tonnes. Martens Democom has been looking for another big triple since selling this ‘beast’ to British demolition company Brown & Mason. With its three TAB configurations, the KMC 1200S is just the job.
Reaching to a maximum pin height of 33.0m (maximum tool weight 7.5t), the longest one we saw marries the excavator’s main boom to an 8.0m mid arm and 9.0m stick.

It uses the same main lift rams, but the cylinder connecting the boom to the mid-arm is from a ZX890 and a stick cylinder from an EX1200. The bucket linkage is usually found on a ZX690.
With the second section of the main boom removed, the second TAB (8.0m boom, 8.0m mid arm and 9.0m stick) works to a maximum pin height of 27.0m and to a maximum depth of around 14.0m.
The third TAB sees the stick swapped for a shorter 3.4m version, which is capable of supporting a 12 to 15-tonne tool at a pin height of 22.0m and depth of 9.0m.

The Belgian demolition company also has some of the world’s largest demolition attachments, including a Mantovanibenne-made CR100 concrete crusher, Hydraram HCC-140V, which even without its the top bracket weighs 14.5 tonnes, and a 15-tonne Genesis GXP 1500R scrap shear. Even more impressive is the Mantovanibenne Eagle II SH2000R. Made sometime around 2012, the 6m-long and boom-mounted 25-tonne scrap shear boosts the weight of the PC1250 to around 130 tonnes.

The list of attachments currently at Peter’s disposal include a 6-tonne Mantovanibenne CR60R concrete crusher. On the scrap metal side, he is waiting for a Verachtert VT60. In the meantime, the 5.3t Fortress scrap shear (Lehnhoff connector), which is made in Wisconsin in the US, is normally carried by one of Marten Democom’s 50-tonners.
This job site is a tight one. Flanked on one side by a busy motorway and on the other by a main rail line, there is no space for the second workshop/spare parts container that normally accompanies the Hitachi excavator, so everything (AdBlue, cables, hoses, generator) is crammed into one storage unit.

Built in 1996, the gas-powered boilers within the power plant used to generate steam for a nearby cigarette manufacturing company. Redundant since 2012, Martens Democom won the contract to demolish the roughly 2,500-tonne steel structure, most of the weight of which is at the top of the structure. I arrived to find Peter welding some extra steel to the jaws of the scrap shear, with the monster TAB stretched out at ground level. The sheer size of the three-piece design was really put into perspective when the company’s Cat 352F trundled below it. This thing is huge!

Big as it is, as I was to find out later that day, the flexibility of the three-piece design is equally at home chomping through steel at height as it is on the ground.
True, some of it was so thick that the most efficient way to reduce it to smaller chunks on the ground was manually with an oxyacetylene torch, but the big Hitachi had no trouble at all reducing the rest of the debris to smaller sizes for the Cat excavator to sort into different heaps and load into containers.

I asked the operator whether he prefers to work with the high-reach arm or three-piece boom? “Not really, but it makes a welcome change when switching between them,” he says. “The TAB is much easier to work with, but I also enjoy working with the 51.0m arm.”

Bringing this story to a close, Martens Democom is mainly active in the Benelux (Belgium, the Netherlands and Luxembourg), Denmark, Germany and northern France, so you could be forgiven for thinking that the KMC 1200S will remain in Europe.

Possibly, but the Belgian company is looking to cross more borders and recently established a UK subsidiary. Should they require the services of the 170-tonner, then it is possible the Demolition Dragon will cross the North Sea. Now wouldn’t that be fantastic.