Home Major Projects Under the rainbow

A Dutch dike strengthening project is home for a special version of the Cat 336 writes Steven Vale.

FINISHED in the distinctive yellow and grey colours of Dutch earthworks giant Boskalis, the one-of-a kind excavator is playing a vital role sand works role on the edge of the Markermeer (Marker lake).

Laying down the base of what when finished will be a wider and stronger dike than the present one, the 33km section, which heads north along the shore of the lake from the village of Durgerdam on the outskirts of Amsterdam to the town of Hoorn, will protect more than one million people should the dike break.

Each year the Dutch spend hundreds of €millions pumping unimaginable volumes of sand along the North Sea coast to shore up the beaches to protect the country from rising seas levels.

Normally, coastal defence work is a job for huge trailing suction hopper dredgers (TSHD). These rainbow the contents into the shallows or, when the height of the beaches needs raising, pump sand through a rigid pipe (typically from 80cm to 1.0m-diameter) to an outlet on the beach. The water drains and the sand is levelled by a dozer. 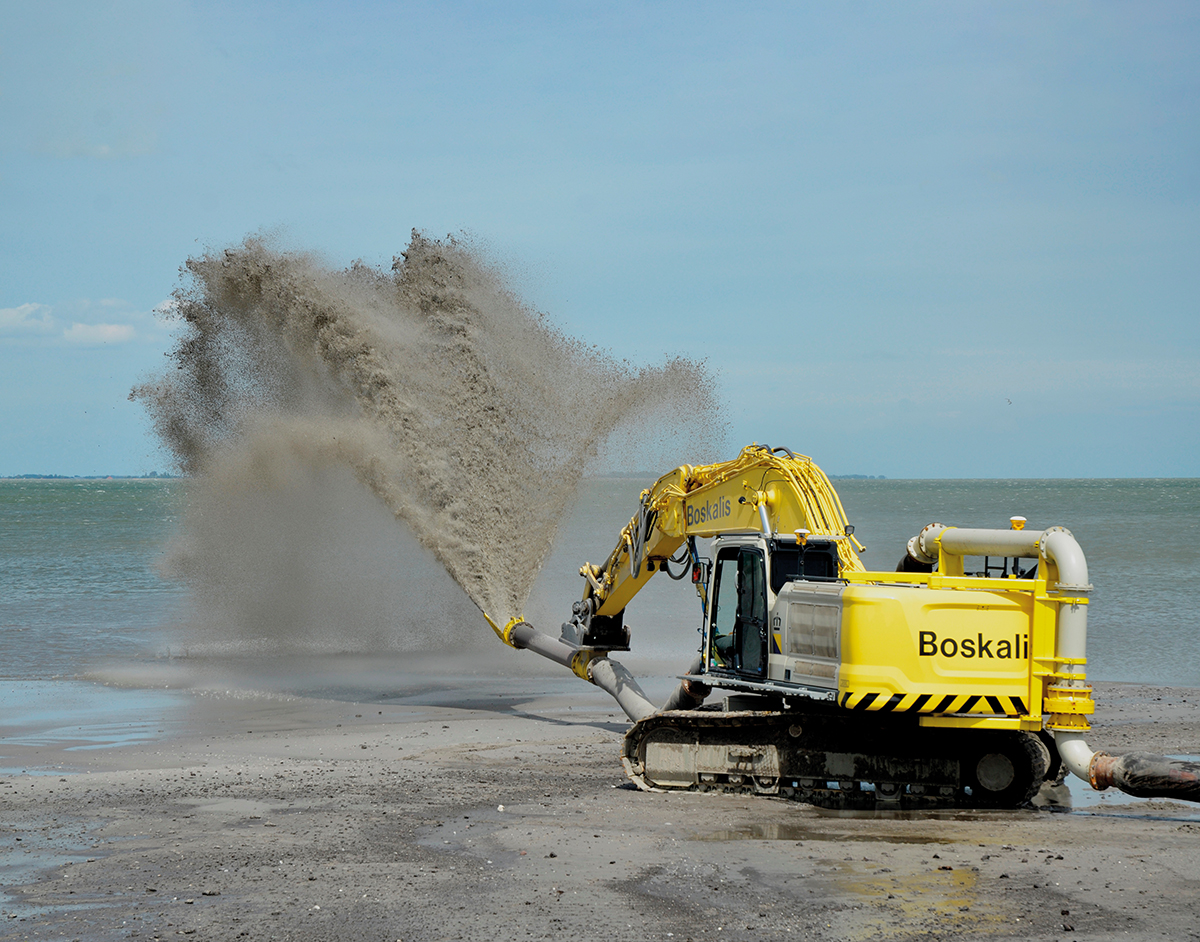 Ideally, this is what the planners would like to have done with the current works, and a 5km stretch of the dike near the village of Warder. This was not possible though because the water is too shallow for one of these large vessels to get anywhere near the shore to supply the 500,000 cubes of sand needed to construct the new dike.

Further complicating matters was the roughly 2.0m layer of peat at the bottom of the murky water near the current dike, below which are many metres of mud.

Unable to support the weight of any mobile machines, this quickly ruled out the normal use of an excavator and dozer to level sand pumped ashore.

Trucking all the required sand (roughly 25,000 loads) along the narrow road on the land side of the dike would have been unpopular with local residents. The only real option was to bring the sand over the water.

Boskalis’ engineering department at Papendrecht, near Rotterdam, was charged with coming up with a solution. After quite a bit of brainstorming, the radical concept they devised relies on the rainbowing technique. Not from a dredging vessel, but from an excavator!

The result of their efforts is amazing and really does have to be seen to be believed because a roughly 17.0m arc of sand and water is rainbowed out from the front of a new Cat 336.

Material supplied via a 30cm-diameter flexible pipe (lengths of 24.0m), is conveyed through a sturdy metal pipe up the rear of the excavator and along the top of the main structure after which it is plumped into a flexible pipe.

Attached to a quick-attachment system at the end of the excavator’s standard 9.0m boom and stick is a 3.0m length of 30cm-diameter rigid pipe. The bolt-on spreading device at the end reduces the diameter, creating the pressure to blast the material out and allow the operator to create an even blanket of sand.

It has not been put on the scales, but in its current guise the excavator, complete with its slightly heavier rear counterweight, is believed to weigh around 42.0-43.0t. A bit heavier than the standard 37.4t of a Cat 336, this is the maximum load the soft  land can support. 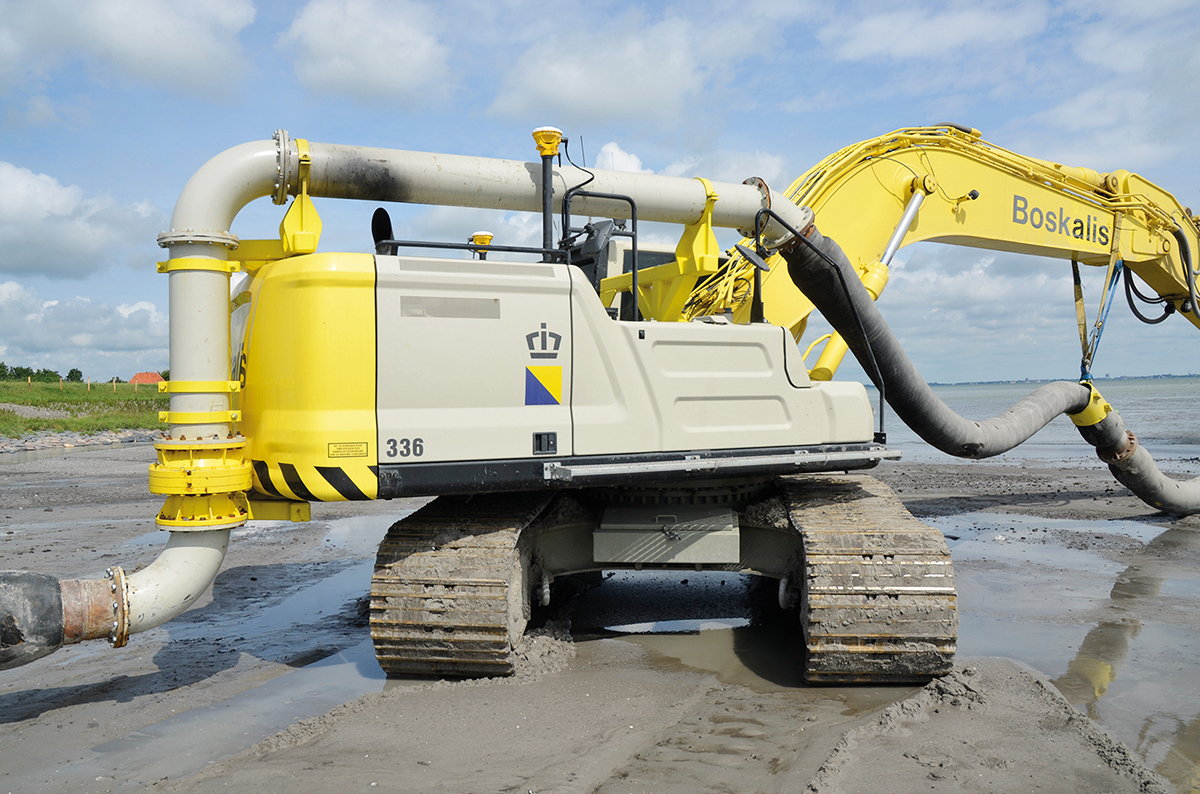 To my mind, one of the cleverest parts of the modification is the way the sand supply pipe pivots at the rear of the excavator, allowing it to turn from left to right to spray the material over a working width of about 70.0m.

The goal is to deposit an even blanket of sand (around 1.0-1.5m), until it rises above the water line. There are two operators of the Cat 336, and on my first visit Arend Kooijman piloted the controls.

During his 19 years at Boskalis, Arend has piloted a wide range of Cat machines, including a 374 Multidocker, 349 and 352, plus a Liebherr dragline and a variety of wheeled loaders and dozers. He has no particular favourite, but admits that his current mount is very different to what he is used too.

He doesn’t need to refuel that often because it is the pumps on the sand vessel that do all the hard work.

Sand spewed out by the Cat 336 is hoovered up from the bottom of the lake roughly 25km from the shore. It is pumped into the hull of sand barges, most of which carry around 700 cubes at a time. Given the shallow depth of the water, even these smaller vessels could not have reached the shore was it not for the efforts of a Hitachi ZX870, which dug a 25m-wide x 3.5m-deep trench for the final 1.5km approach and an area for them to turn.

The sand barges moor alongside a stationary barge and the contents are unloaded by a very tidy 13,000-hour high-rise Cat 365C. Scooping up 4.5m³ at a time, the 365C empties sand dug up from the bottom of the lake into a hopper. Initially water only is pumped through the pipe. Sand is then added in stages.

It depends on the length of the pipe and the texture of the material, but the two on-deck pumps combine to generate a pressure of around 9 bar to pump the material at 6.0m/sec to the Cat excavator. 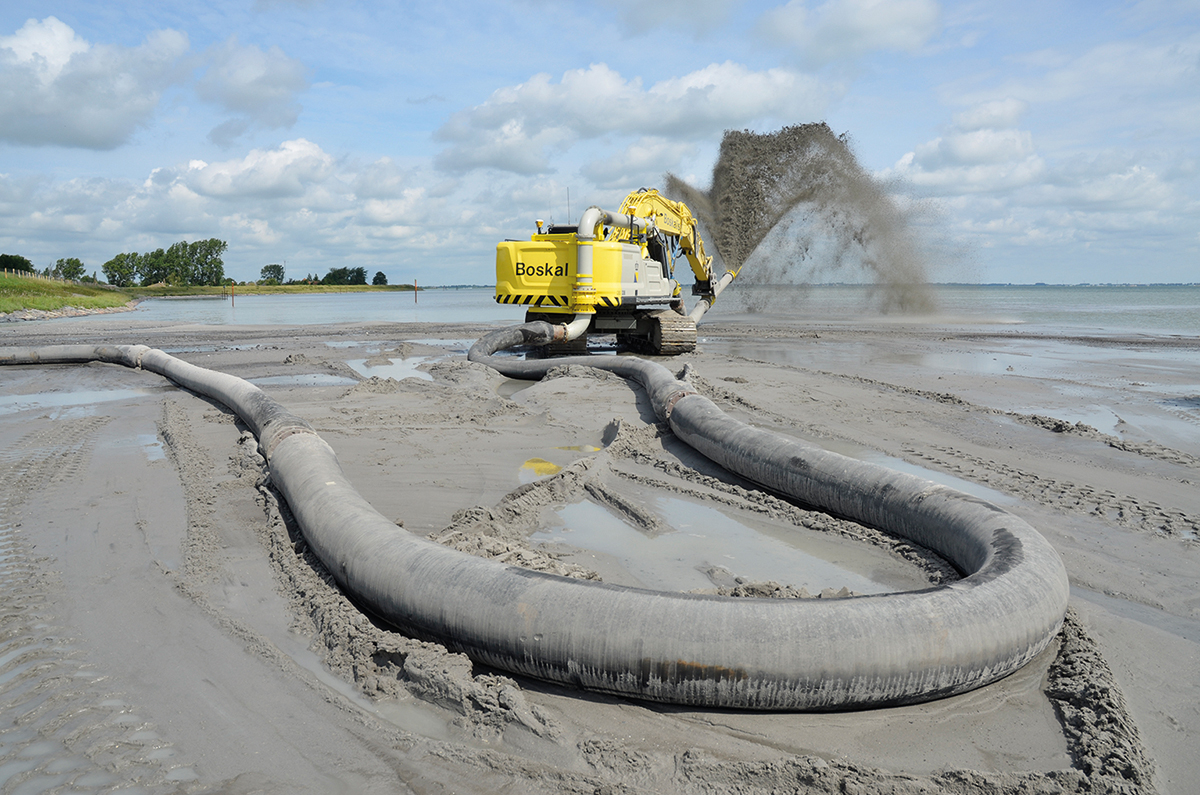 The two main pumps on deck are capable of handling unwanted objects with a maximum diameter of 14cm, but just to be on the safe side the sieves near the top of the hopper are set to 10cm.

Sand and water are generally mixed 50:50, and at the time of our visit it was just over 1km to the Cat 336 (max. length here will be 2.5km requiring the use of a booster).

Mission control is an office on the deck of the barge where an operator monitors several screens and high-tech computer software to ensure the right mixture and pressures. The operator is in constant contact with the Cat 336, to let him know when the water flow was about to start and when the sand is added.

Specially developed computer software allows the operator of the 336 to layer a blanket of sand. The details are off limits, but what we can reveal is that the operator fills in a digital colour chart.

This is a crucial part of the work because the sediment must be compressed evenly to prevent pockets of peat from seeping through to the surface. Once the sand is in place and compacted, the water in the sediment is absorbed to the surface using specialist vertical drainage rigs.

A dozer, or wheeled loader, sometimes assists the Cat 336 when it needs to track forwards. Normally, when sand is pumped through rigid sections of steel pipe, an excavator inserts extra lengths as required without interrupting the flow of material.

This is not an option with the flexible pipework, so enough lengths must be joined together to empty the contents of at least one sand barge. The excavator can drag up to 70m of pipe behind it, but requires a bit of assistance from the dozer when tugging longer lengths.

Dedicated TSHDs work around the clock in 12-hour shifts. There is no need for a night shift at this job, and the Cat 336 works a single daily 12-hour shift from Monday to Friday.

It depends on the sand supply boats and the weather out on the lake, but the excavator spews out anything from 300 to 600 cubes an hour.

I returned to the site two weeks later to see the Cat 336 deposit a second layer of sand over the top of the first. It is not necessary to spray the material so far in front of it this time to create the land for it to stand on so the flow of material was not reduced at the end of the extension.

The first thing I noticed was that the initial straps securing the flexible pipe below the excavator’s boom and stick had been swapped for a new smarter looking system. It needs stressing that they are fine-tuning what is essentially a prototype.

There was a different operator too, this time main driver Patrick Crielaard, who has piloted several Cat excavators for Boskalis, including a two-year stint with a 336E on the Dutch island of Texel.

In fact, when he first sat on his latest mount in January this year he expected it to be with its standard bucket. Boskalis had other plans though, and Patrick was asked whether he was interested in being involved with something special.

“Initially, I thought it was a shame to modify a new excavator,” he says. “Also, I thought it might be a bit boring, but it is actually really interesting and challenging work.”

“If I get it right and accurately fill in the colour chart then the excess water runs back to the lake, and other than a final spot of levelling, there is not a lot of work for the dozer,” he adds.

Once the second sand layer is deposited the excavator will move on to the next location. More sand will be needed to raise the level to create the required 1:15 slope from the top of the new dike at Warder to the water. This will all come from the lake, but will be unloaded into the ADT skips by a pontoon-based excavator.

There is still another year of rainbowing left for the Cat 336 at the current project. Patrick admits to missing moving cubes on a standard excavator, but relishes the opportunity to be involved with something special.

“My dream is to travel and work abroad and I would love to do it with this excavator,” he says, “and especially at coastal defence projects to protect land from rising sea levels.”

Australia, Canada and the Middle East are high on his wish list. Boskalis works at water projects all over the globe so it is just possible he might have an opportunity to fulfil his travel ambitions when the current works are completed.

If not then I suspect they will remove the additional in-cab screen, but probably leave the heap of electronic wizardry in place.

It will probably take a couple of days to remove all the pipework, after which the excavator can be reunited with its bucket and get back to digging cubes of material rather than spreading them.